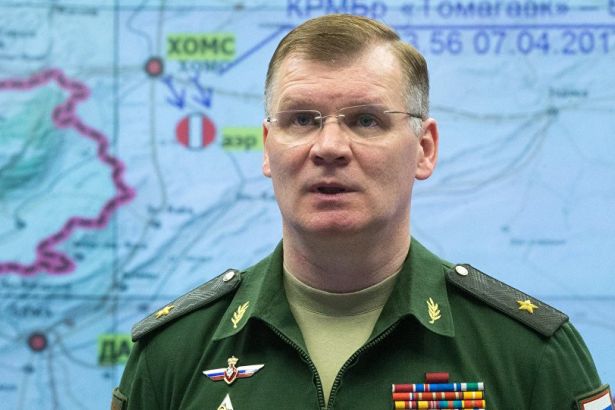 The Russian Defense Ministry said Friday it has substantial and convincing evidence confirming that the April 7 chemical attack in Syria's Douma was a provocation staged with the direct involvement of Great Britain.

"The Russian Defense Ministry has substantial evidence that a planned provocation was carried out in Douma on April 7 to mislead the international community. Its true purpose is clear to everyone today - to provoke the United States to launch missile strikes against Syria," ministry's spokesman Maj. Gen. Igor Konashenkov said at a news briefing.

"There are also other proofs at the disposal of the Russian Defense Ministry that testify to the direct involvement of Great Britain in organizing this provocation in Eastern Ghouta," Konashenkov stressed.

According to the spokesman, representatives of the Al-Qaida-linked 'White Helmets' were under enormous pressure from London to carry out the chemical weapons provocation in Syria's Douma. White Helmets founded by the former British army officer and military contractor Le Mesurier.

Konashenkov released statements by medics from Douma's hospital, who said a group of people toting video cameras entered the hospital, shouting that its patients were struck with chemical weapons, dousing them with water and causing panic. The medics, however, said none of the patients had any symptoms of chemical poisoning, according to the statements.

The statement followed an earlier statement by Russian Foreign Minister Sergey Lavrov, who said that "intelligence agencies of a state that is now striving to spearhead a Russo-phobic campaign were involved in that fabrication." He didn't elaborate or name the state.

Reports about the alleged attack in Douma, located in the Damascus suburb of Eastern Ghouta, emerged on Saturday. The European Union and the United States have rushed to blame the forces of the Syrian government for the incident, however, Damascus has refuted the allegations. The Syrian government invited the global chemical watchdog to visit the former terrorist-held Syrian town of Douma to probe an alleged poison gas attack.