The guards of a textile boss attacked the workers with sticks in Turkey’s İzmir as the workers stopped working after some of their colleagues were tested positive for COVID-19. 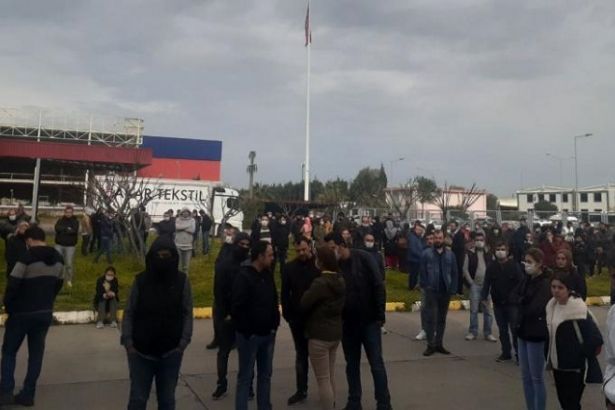 Some of the textile workers, who were working at Akar Textile Factory in an organized industrial zone in Turkey’s western metropolitan of İzmir, were recently tested positive for COVID-19. As the workers decided to use their right to abstain from work amid coronavirus fears, the representatives of the boss forced the workers to continue to work.

“The provincial health board has not identified any defect. The conditions are proper for working, all to the work! You have to work to receive your wages this month,” the boss’ representatives imposed on nearly 1,800 textile workers.

As the textile company did not provide the workers with any masks or medical equipment against the coronavirus outbreak, the provincial health board controversially reported that “the measures at the workplace were proper to work”.

As the workers used their legal rights and stopped working early today, the so-called security guards of the factory attacked them with sticks as the bosses were laughing at the workers during the attack.

"We Breathe Down the Bosses' Neck" (PE), the solidarity network initiated by the Communist Party of Turkey (TKP), has released a statement following the attack on the textile workers.

“We already know that the calls of the President, the ministers, and the members of the ‘Scientific Board’ for ‘staying at home’ were not for us, the workers, and they think our lives can be easily risked,” the statement notes, indicating to the Turkish government’s controversial decisions during the coronavirus pandemic.

The solidarity network (PE) has stated that the bosses cannot even tolerate the workers’ demands for health measures against the pandemic, adding that the bosses attacked the workers with reference to the provincial health board reporting that “the working conditions at the factory were proper”.

PE has noted that the health board, the bosses of Akar Textile and their guards are responsible for the unhealthy working conditions, and the stick attack on the workers who are forced to work without any measures against the coronavirus outbreak.

Turkey’s President Recep Tayyip Erdoğan announced yesterday some new “measures” against the pandemic. As the citizens over 65 are already not allowed to leave their homes, the government has imposed a partial curfew on the citizens under 20 as well.

However, Erdoğan severally stated that the production in Turkey must continue despite the pandemic. Therefore, Turkey’s working people cannot stay home as they have to work while many of them have become unemployed or instructed to “stay home” with unpaid leave.