As the number of Turkish soldiers killed in shelling in Syria’s Idlib increased to 8, Turkish President Recep Tayyip Erdoğan said, "Those who test our determination with such malicious attacks will understand their mistake" signaling for further retaliation and escalation of direct clashes. 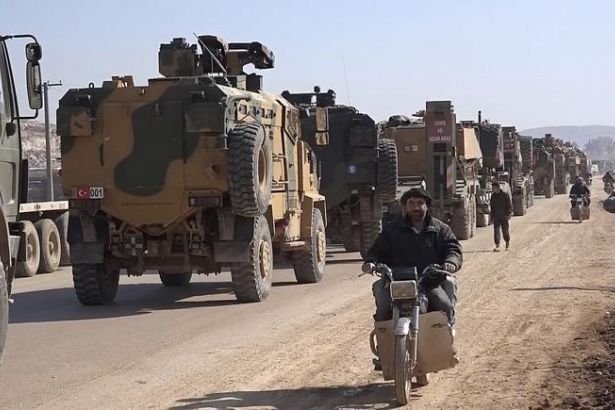 Turkish President Recep Tayyip Erdoğan has made statements regarding the recent shelling by the Syrian army claiming the lives of eight Turkish soldiers and nine wounded in Idlib province of northwestern Syria on Monday.

Speaking before departing for a visit to Ukraine, Turkish President Recep Tayyip Erdogan said that the Turkish army hit 46 targets in Syria in response to the attack of the Syrian government forces in Idlib.

‘‘Those who test our determination with such malicious attacks will understand their mistake,’’ Erdogan warned.

He underlined that Ankara would not accept any attempts by Russia to de-escalate the tensions with Damascus, saying Moscow was told that ‘‘Turkish government would not stand for any situation where we are prevented.’’

‘‘It is not possible for Turkey to remain silent when our soldiers are being martyred,’’ Erdogan stated.

Erdoğan also claimed that Turkish F-16 fighter jets were also involved in the retaliation, causing 30-35 casualties on the Syrian side.

However, Syrian Arab News Agency (SANA), Syria’s state news agency, reported that there were no injuries or damage in the Turkish strikes following the Idlib shellings by the Syrian army, adding that the government forces captured two villages on the way to Saraqeb, a province in northwestern Syria located in the east of Idlib Governorate.

A London-based humanitarian monitoring group, the Syrian Observatory for Human Rights (SOHR), claimed that 13 Syrian soldiers were killed in the Turkish strikes.

Russian Centre for the Reconciliation of Opposing Sides in the Syrian Arab Republic, founded in February 2016 as a peace monitoring center and information office for Syrian conflict headquartered in Khmeimim Air Base in Syria’s Latakia, reported that Turkish fighter jets have not entered Idlib air space so far.

‘‘The air space in the de-escalation zone Idlib is constantly controlled by the Russian army. The Turkish Air Force has not violated the borders of Syria and we have detected no attack against the Syrian army positions,’’ the Russian Center for the Reconciliation of Opposing Sides in the Syrian Republic noted in its statement.

The statement also indicated that Turkey did not inform Russia about its military operations against Syria and therefore became the target of Syrian army shelling.’’

Following the direct clashes between Turkish and Syrian armies in Idlib, the ruling Justice and Development Party (AKP) representatives and their coalition partners made warmongering statements against the Assad government.

Ömer Çelik, the AKP Spokesperson, said, ‘‘This obviously means the violation of the Idlib agreement. In response, our Turkish Armed Forces targeted and destroyed the regime forces. This is, of course, a clear violation of the reconciliation of the agreement signed by Russia and the Assad regime under auspices of Moscow.’’

‘‘This situation will be discussed between Turkey and Russia. We have retaliated to this offensive, and it will be continued. The violation of the Idlib agreement will cause the regime forces in the region to become direct targets for the Turkish forces,’’ Çelik threatened.

The Idlib agreement is a consensus between Turkey and Russia to create a demilitarized zone (DMZ) in Syria’s Idlib Governorate, which was under control of Turkey-backed jihadists at that time, to be jointly patrolled by military forces from Russia and Turkey to prevent possible clashes between the Syrian government forces and militants. On September 17, 2018, the Russian President Vladimir Putin and Turkish President Recep Tayyip Erdoğan had reached an agreement to create a buffer zone in Idlib.

Last year, Russia and Syria had accused jihadists controlling the area of violating the ceasefire agreement and carrying out attacks against civilians and military positions.

Upon the violations of the agreement by Turkey-backed jihadists, especially since the Al-Qaeda-affiliated Hayat Tahrir al-Sham (HTS) emerged as the dominant group in the region last year, Russia and Syrian armies have launched an offensive to retake Idlib in May 2019.

Speaking about the Syrian Army’s war on terrorism and advance towards Idlib, Syrian President Bashar Al-Assad had previously said that the recent battles in Idlib unveiled Ankara’s open and limitless support for terrorists in Syria.

Idlib is known as the last jihadist-held territory in Syria. The Syrian army captured many strategically important towns in Idlib in January 2020, entering Maarat al-Numan and now aiming to retake Saraqeb. In these towns, a strategic highway linking the Syrian capital Damascus with northern Syria passes through. The Assad government forces aim to reopen the highway, which has been closed since 2012.