Turkish President Recep Tayyip Erdoğan sent a letter to EU leaders, urging them to boost dialogue for the solution of the recent crisis in the Eastern Mediterranean with Greece over energy resources while accusing Athens and Greek Cypriot Administration of Southern Cyprus of escalating tensions in the region. 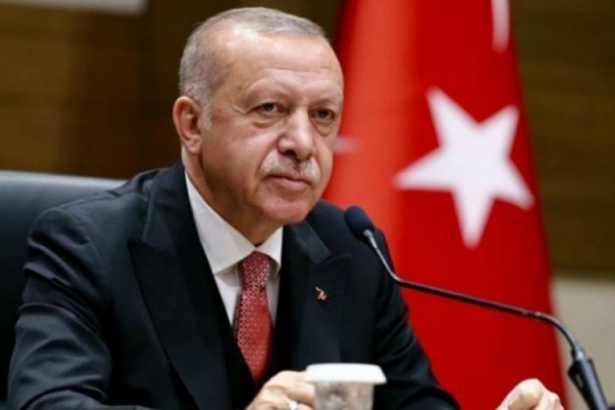 Turkish President Recep Tayyip Erdoğan on Wed. has urged the EU to take an impartial stance and boost dialogue in the resolution of the ongoing dispute between Ankara and Athens over energy resources and maritime boundaries in the Eastern Mediterranean in a letter he sent to the officials of the EU institutions and all the leaders of member states ─ except Greek Prime Minister Kyriakos Mitsotakis and Cypriot President Nikos Anastasiadis ─ on the eve of the European Council summit to be held on Oct. 1 and Oct. 2.

‘‘Our Eastern Mediterranean policy has two main objectives. The first one is the delimitation of maritime jurisdiction areas in an equitable, just and fair way in the eastern Mediterranean in accordance with international law and the protection of our sovereign rights and jurisdiction over our continental shelf. The second one is securing equal rights and interests for Turkish Cypriots over the hydrocarbon resources of the island of Cyprus, as the co-owners of the island,’’ Erdoğan underlined, adding that Turkey wishes that the Eastern Mediterranean becomes a region where all parties cooperate, hydrocarbon resources are equitably and fairly shared, and where peace and stability prevail.

Turkish President also noted that Ankara hopes that hydrocarbon resources set the ground for a resolution of disputes in Cyprus and a greater EU as coal and steel played an important role in the formation of the EU’s point of origin.

Accusing Greece and Greek Cypriot Administration of Southern Cyprus (GCASC) of being the main causes of escalating tensions in the region by disregarding Turkey and Turkish Cypriots through unilateral steps and fait accompli since 2003, Turkish President said, ‘‘GCASC, which became a member of the EU before the Cyprus dispute was resolved, ignored the Turkish Cypriots and signed maritime delimitation agreements with neighbouring countries in 2003, 2007 and 2010, announced license areas in 2007, initiated international tenders and conducted its first drilling operation in 2011.’’

‘‘Greek/Greek Cypriot duo further went on to constitute a mechanism under the name of Eastern Mediterranean Gas Forum against Turkey and the Turkish Cypriots and also founded tripartite and quadripartite mechanisms of cooperation with countries in the region against Turkey,’’ Erdoğan added in his letter to EU leaders.

Turkish President claimed that Ankara has been underlining the importance of diplomacy for the resolution of disputes in the Eastern Mediterranean to protect both its rights and those of Turkish Cypriots, but it started to take steps on the ground in 2018 ─ after waiting for seven years ─ when Turkey’s calls for dialogue and cooperation did not yield any results.

Saying that Turkey advocates a just and equitable delimitation of maritime jurisdiction areas in the Eastern Mediterranean in accordance with international law, Turkish President Recep Tayyip Erdoğan continued, ‘‘For this purpose, I would like to reiterate once again that we are ready for a dialogue with Greece without preconditions. In this context, I would like to point out that we have been supporting from the outset an initiative proposed by NATO Secretary-General Jens Stoltenberg for de-confliction among naval and air vessels to reduce tension in the region.’’

‘‘On the other hand, Turkish Cypriots and Greek Cypriots should establish a cooperation mechanism, including an equitable revenue sharing of hydrocarbon resources, as co-founders of the dissolved Republic of Cyprus and co-owners of the Island,’’ he also stressed in the letter.

Suggesting that there is no need to wait for the settlement of the Cyprus issue in order to establish such a cooperation mechanism, Turkish President argued, ‘‘Both parties on the island operate through international oil companies in their respective designated license areas. Therefore, only the two peoples [Turkish and Greek Cypriots] living on the Island should decide together whether to suspend or continue these activities.’’

‘‘I believe that it would be extremely beneficial to establish an inclusive energy cooperation forum that will bring together all parties in the Eastern Mediterranean, including Turkish Cypriots,’’ he also said, adding that added that Ankara is ready to provide the necessary support for any steps in this direction.

Stating that the EU’s biased stance against Turkey contravenes the EU acquis and international law, Erdoğan noted, ‘‘I wish that the EU supports our thoughts regarding this issue, leaves its biased position that it has taken up against a candidate country ─ Turkey ─ and does not unjustly and unconditionally advocate the maximalist theses of Greece and the GCASC.’’

‘‘This biased stance of the EU complicates the solution of the ongoing dispute, escalating the tensions and harming Turkey-EU relations, as well as their common interests in many areas.’’

‘‘What Turkey expects from the EU is to remain impartial, to maintain an equal distance from everyone, as well as to promote dialogue and cooperation,’’ Turkish President Recep Tayyip Erdoğan said in his letter, and underlined: ‘‘It is unfair and unjust to demand that Turkey and Turkish Cypriots halt their hydrocarbon research activities before the above-mentioned steps are taken.’’

Noting that Ankara has always been ready for dialogue and cooperation for the resolution of disputes in the region, Turkish President said, ‘‘Yet, we have not given to the maximalist demands that have been attempted to be imposed upon us through the EU.’’

‘‘We don’t have an eye on the rights of any country. However, we have always protected and will continue to protect our rights and those of the Turkish Cypriots as the guarantor state,’’ he told in the letter.

Stressing that it is the common responsibility of the international community to find an equitable and peaceful solution to the issues in the Eastern Mediterranean, Erdoğan urged the EU authorities to take necessary actions to promote dialogue and cooperation as well as to avoid taking dangerous steps and decisions which could further aggravate the current crisis between Ankara and Athens.

In his letter, Turkish President Recep Tayyip Erdoğan also mentioned Turkey’s desire for the revision of ‘‘the EU-Turkey Statement’’ aiming to put an end to irregular migration from Turkey to the EU countries, agreed on 18 March 2016 in return of 6-billion euros financial support from the bloc, considering the changing circumstances and gradual strengthening of Turkey-EU relations with all its aspects in line with their common interests.

‘‘I believe that the path to achieve this goes through the awareness of the vital importance that our relations entail for our common interests in many various areas, such as illegal migration, terrorism, trade, energy, and I look forward to your valuable support to this end,’’ Erdoğan stated.

EU: ‘‘ALL OPTIONS REMAIN ON THE TABLE AGAINST TURKEY REGARDING EAST MED DISPUTE’’

As Greece and Turkey are currently in dispute over the delimitation of the hydrocarbon exploitation areas in the Eastern Mediterranean, the recent crisis in the region will be discussed at the EU summit on Oct. 1 and Oct. 2 in Brussels.

In the invitation letter for the summit to be held, Charles Michel, President of the European Council, stated that the dinner of the EU leaders on Thursday night will be exclusively dedicated to the situation in the Eastern Mediterranean and relations with Turkey.

‘‘Our objective is to create a space for a constructive dialogue with Turkey to achieve stability and security in the whole region and to ensure full respect for the sovereignty and sovereign rights of all EU member states,’’ Michel in the letter.

Adding that this will only be possible if Turkey engages constructively, the European Council President Charles Michel warned, ‘‘All options remain on the table to defend the legitimate interests of the EU and its member states.’’

Last week, Turkish President Recep Tayyip Erdoğan and his French counterpart Emmanuel Macron had talked over phone on the issues of Libya, Syria and the recent tensions in the Eastern Mediterranean.

During the talks, the French President Emmanuel Macron had called on Turkey to take necessary steps to ease the rising tensions with Greece and the Republic of Cyprus in the Eastern Mediterranean.