Gendarmerie and police attacked the villagers who wanted to stop the drilling operation of a mining company in Turkey's northern district of Ünye. Many protestors were wounded and detained. 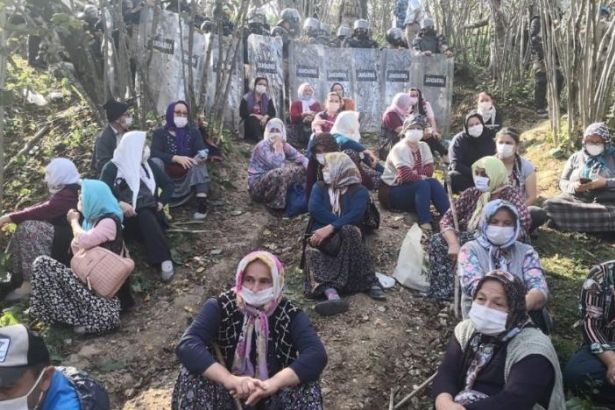 Gendarmerie and police attacked the villagers who wanted to stop the drilling operation of a mining company in Üçpınar village of Ünye district of Ordu with pepper gas and truncheons. Villagers, including elderly women and children, were injured and many were detained. The dialogue between the villagers and the regiment commander in Ünye reminded the recent reaction of the miners on their march the other day where a protesting miner's video "is that so commander!” shook the social media.

Cem Akman, one of the villagers who spoke to soL, said that the mining company had completed the drilling work in Yeşilkent Village, where the gendarmerie attacked the resisting villagers yesterday and today the drilling machine was brought to Üçpınar Village.

Akman said, "In the morning hours, the gendarmerie regiment commander came to Üçpınar, our village. He said; 'There is no mining work, we will not create an outburst, you better not agitate the situation, this is not mining work, only drilling.' The roads were closed, so we walked through the alleyways and started a sit-down protest in front of the drilling machine.”

As a result of the attacks of the gendarmerie, riot police and SWAT forces on the sit-down protestors who were composed of approximately 200 villagers, there were injuries and many villagers were detained.

Akman said children and women over the age of 70 also participated in the protest and many people were detained.

Stating that the drilling machine came to the area where the work would be carried out, Akman said the the villagers were still in the fields, and the anxious suspense waiting continues...

Akman pointing out that a similar process was experienced in Fatsa before, and a mine where gold was extracted by cyanide started operating in the village, after the same scenario which said “only drilling, no mining work”. So the people of the village struggled to protect their only source of income.

Akman said, "Our only source of livelihood here is hazelnuts. I could go to the university with the income that my family earned from hazelnuts. We want to protect our hazelnuts and our greenery. This is our goal."

Gendarmerie attacked the villagers who protested the drilling work of a mining company in Yeşilkent Village of Unye district of Ordu.

While many were injured, the villagers' resistance continues.

It was learned that the mining company started drilling work under the protection of the gendarmerie and the villages of Çiğdem and Üçpınar were under blockade.

10 villagers, 2 of whom are women, were detained after a pepper gas attack, and were released later. It was learned that the health conditions of the villagers affected by the gas were good.

The people of the region had previously gathered in the area to be drilled and did not allow any work.