Turkish minister after earthquake: "It is not right to expect everything from grovernment"

After the earthquake in Elazığ, Turkey's Minister of Energy and Natural Resources, Fatih Dönmez, made a statement on a television program, claiming that "It is not right to expect everything from the government". 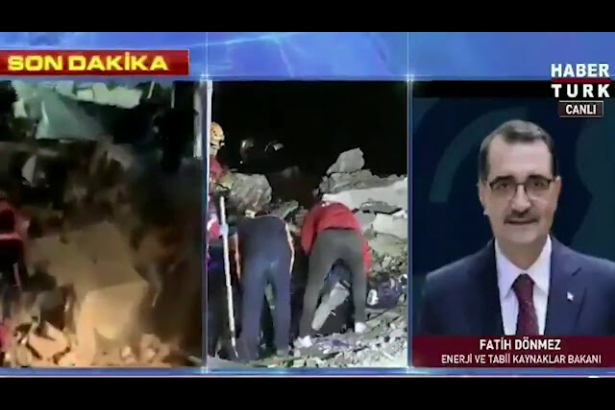 Fatih Dönmez, Minister of Energy and Natural Resources, made a statement about the earthquake in Elazığ on a live TV program at HaberTürk last night.

Dönmez's interpretation of the earthquake was largely controversial. "It is not right to expect everything from the government, our citizens should take precautions," he claimed.

The Interior Minister, Süleyman Soylu, on the other hand, stated that "politicizing the earthquake and discussing the preparedness of Turkey for an earthquake is an inhumane approach", targeting those criticizing the government for the casualties and crisis in the region after the earthquake.

Meanwhile the chairman of the Turkish Red Crescent, Kerem Kınık, asked for donations from the citizens with the message he shared minutes after the earthquake. Kınık removed his post after the message stirred controversy.

Red Crescent has been under public scrutiny for a long time because of the corruption reports.

An earthquake of 6.8 magnitude occurred in Turkey's eastern district Elazığ yesterday at 8:55 pm local time. According to the latest information released by Disaster and Emergency Management Presidency (AFAD), the number of people who died in the earthquake increased to 21 and the number of injured to 1,030.