A Turkish judge, Mehmet Yoylu, who criticized a woman lawyer for wearing an “inappropriate” miniskirt during a hearing has been suspended amidst widespread protests against his remarks about the lawyer 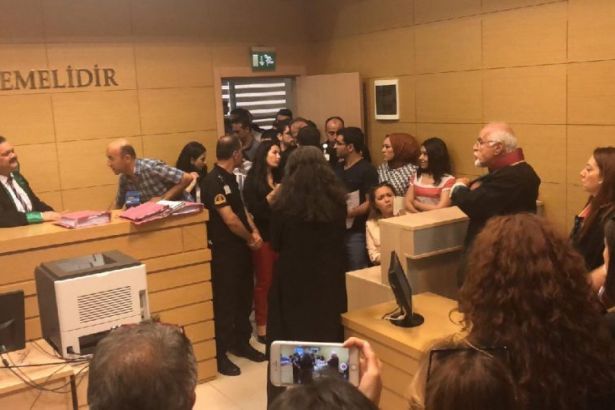 On May 29, Turkish judge Mehmet Yoylu demanded to take a picture of Lawyer Tuğçe Çetin’s skirt in his courtroom in İstanbul in order to notify the issue to the İstanbul Bar on the grounds that “the skirt’s length was 15 cm higher than the knee level”.

As the incident prompted other lawyers in the courtroom, they gathered in front of the hearing room to protest the judge’s misogynist attack. “Women are waiting for an apology from you,” the lawyers chanted against the judge during their staged protest to support their colleague. Then the judge had to leave the hearing room amidst outrage.

Lawyer Tuğçe Çetin responded to the judge’s reactionary attack via her social media account. She shared a photograph of her taken in the courtroom, reading, “We’re where we always are, wearing the same clothes.”

The Board of Judges and Prosecutors (HSK) has decided to temporarily suspend Judge Yoylu from duty following the lawyers’ protests against his reactionary attack on Lawyer Çetin. The HSK group deputy chair Mehmet Yılmaz said that an investigation was launched into Yoylu and that he has been temporarily suspended from duty.