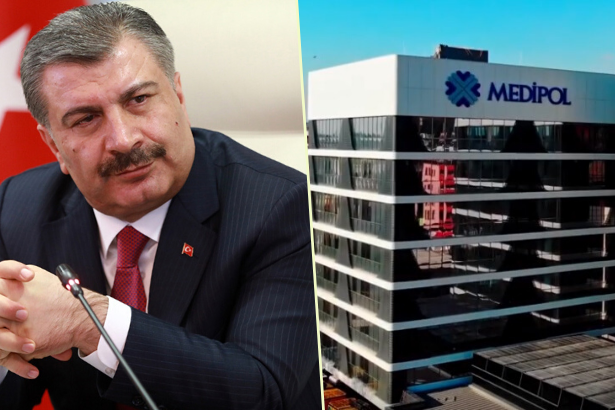 Medipolitan Health and Education Services, a healthcare provider group in Turkey owned by the country’s Health Minister Fahrettin Koca, increased its capital from 30 million Turkish Liras (~$4 million) to 100 million Turkish Liras (~$13.6 million) amidst the COVID-19 pandemic. It is noteworthy that the Minister’s healthcare company increased its capital in December 2019, when the coronavirus outbreak first emerged throughout the world.

The story of Medipolitan Health and Education Services, led by Turkey’s Minister of Health, dates back to the 90s. As the company started to grow with the Justice and Development Party (AKP)’s accession to political power in 2002, the Health Minister Fahrettin Koca was known as Turkish President Recep Tayyip Erdoğan’s family doctor.

Turkish President’s mother, Tenzile Erdoğan, had received treatment for a long time at the Medipol Hospital in Istanbul’s Kadıköy district and died at the age of 88. Turkish President’s Recep Tayyip Erdoğan’s brother, Mustafa Erdogan, and his uncle Saim Mutlu, were also treated at the Medipol Hospital, belonging to Medipolitan Health and Education Group.

After he was appointed as the Minister of Health on July 10, 2018, Fahrettin Koca left his position in the company on July 21.

Following the appointment of Koca as Turkey’s Minister of Health, Medipolitan Health and Education Services began to attract a great deal of attention due to privileges granted to the company as a favor of its strong relations with the Turkish government.

In July 2019, a historical building constructed in 1928, which was used as the General Directorate of the Turkish State Railways (TCDD) in Ankara and later transformed into a guesthouse along with the area where the museum, including works written by Mustafa Kemal Atatürk, children’s nursery and lodgings, were unlawfully given to Istanbul Medipol University, whose one of the founders is Turkish Health Minister Fahrettin Koca.

Uncomfortable with the news reported about the unlawful allocations of historical buildings belonging to TCDD, the university management had launched legal action, requesting censorship for a large of news published about the issue. The court ruled 564 news including terms denoting unlawful and questionable transactions to be denied access on the pretext that ‘‘the language used is defamatory and accusatory, and it may lead the reader to be suspicious and hostile’’.

Last year, Murat Emir, the parliamentary main opposition Republican People’s Party (CHP)’s Ankara Deputy, had stated that lands in Etimesgut district of Ankara were transferred from the Treasury to the state-owned TOKİ in 2004, and then, TOKİ (Turkey’s Housing Development Administration) transferred these lands to Turkey Education, Health, Science, and Research Foundation (TEBA), whose president was the current Minister of Health, Fahrettin Koca.

TURKISH HEALTH MINISTER HAD ISSUED SPECIAL CIRCULAR FOR HIS HOSPITAL

Reminding that the guesthouse in the historic train station building in Ankara was given to the Medipol University owned by the Health Minister Fahrettin Koca, the Turkish Medical Association (TTB) President Sinan Adıyaman had said that the circular was not ethical and acceptable.

Islamic AKP government in Turkey has not seen any problem with feeding and growing religious cults since its establishment, as the political power used them to reflect as a success to share state institutions among Islamic cults and communities.

Turkish President Recep Tayyip Erdoğan pays great attention to the security of his own administration and appoints his ministers from several pro-government cults to replace the positions in the government institutions with other Islamic cults close to the AKP after the purge of the Gülen community [currently classified as a terrorist organization by Turkey under the name of Fethullahist Terrorist Organization (FETÖ)] following the coup attempt of July 15 in 2016, led by the followers of the U.S.-based Islamic cleric Fethullah Gülen.