The Turkish government tried to press upon pro-Kurdish party through the jailed leader of PKK, Abdullah Öcalan, for 'yes' votes in 2010 constitutional referendum, Selahattin Demirtaş told a court on Wednesday 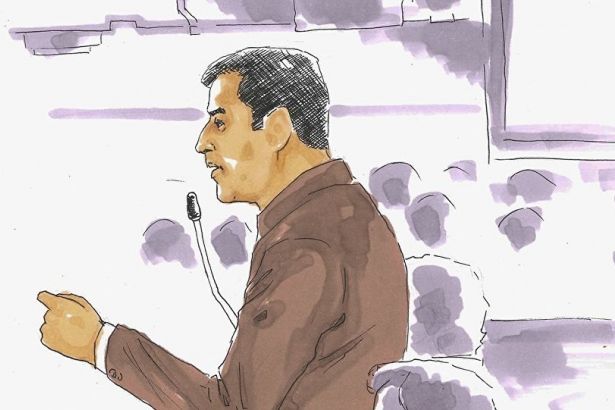 The former co-chair of the pro-Kurdish Peoples' Democratic Party (HDP) Selahattin Demirtaş spoke to a court on Wednesday and stated that the terrorism charges against him were politically motivated. As a result of this, he expressed that he did not think he would receive a fair trial.

Selahattin Demirtaş is being accused of being an administrator of the militant Kurdistan Workers' Party (PKK) and being the head of its political section. He denies the charges but faces up to 142 years in prison if convicted.

Demirtaş said President Recep Tayyip Erdoğan had urged the courts to arrest him and his ruling party AKP to run a smear campaign against him.

"The Turkish government tried to pressure us via Abdullah Öcalan, in order to obtain more 'yes' votes in the [constitutional vote in 2010] referendum," he said. At that time, the 'Oslo Talks' were ongoing between the Turkish AKP government and the PKK. The pro-Kurdish party and the PKK called for the boycott instead of a 'No' vote.

PKK leader Abdullah Öcalan is serving a life sentence at a prison on İmralı island in the Marmara Sea.

Demirtaş claimed that the main crisis with the AKP government had started back in those days when then-Prime Minister Erdoğan began to apply political pressure on the pro-Kurdish party, because they had decided 'not to support' the constitutional referendum, while the government was talking with PKK authorities in Oslo at that time. Despite this, after the Oslo Talks, the so-called 'solution process' that had started also included the pro-Kurdish party.

'A MINISTER VISITED ME WITH A LETTER FROM ÖCALAN'

"At that time, there was a solution process that did not involve our political party. It was the process known as the Oslo Talks where the Turkish government and Kurdistan Workers’ Party (PKK) representatives negotiated face to face. During this process, a constitutional proposal was submitted. We objected to two things: The first one was the absence of an identity-related regulation in the proposal. The second one was dangerous regulations regarding the Supreme Council of Judges and Prosecutors (HSYK) and higher judicial bodies," he continued.

The pro-Kurdish party and the PKK called for a boycott instead of a ‘No’ vote, saying that the proposed constitutional reforms did not meet the Kurdish need for a brand new constitution. The party boycotted the referendum on grounds that it failed to address their demands for greater political and cultural autonomy, not because of changes about the HSYK.

Demirtaş stated that after their boycott decision in 2010, a minister visited him with a letter from Öcalan. He said that the aim of this letter was to apply pressure regarding the boycott decision of their political party and to force them to vote 'yes' in the 2010 constitutional referendum.

"If they deny this, I will make the witness listen here. We did not accept their pressure," he added.

'ÖCALAN ASKED TO REVIEW THE DECISION'

Demirtaş noted that in the letter signed by Öcalan he stated that "We respect the decision of our party. Despite this, I ask you to evaluate as a political party whether the constitutional amendment could pave the way for a new dialogue or solution process."

The core of the package was a major overhaul of the judiciary. This gives the president and parliament greater say over the appointments of senior judges and prosecutors, and expands the size of the constitutional court and that of the judicial body in charge of appointments.

At the end, the stance of Kurdish parties served Erdoğan's 'Yes' campaign, 58 percent of voters favoured the referendum, while 42 percent were opposed.

He was also a key figure in the so-called 'solution process' between Erdoğan's AKP government and the PKK and pro-Kurdish party in 2009 and 2015, as a part of the delegation that carried out meetings with PKK leader Abdullah Öcalan.

According to the 'İmrali records', in 2013 Öcalan said he would lend his support to the presidential system on the condition that the system is similar to that of the United States and that Erdoğan is the president of that system.

Demirtaş concluded, "[Erdoğan] attempted to pressure the HDP with Abdullah Öcalan in order to prevent us from participating in the 2015 general elections as a political party, because the AKP needed 400 deputies to amend the constitution alone. The government’s delegation which conducted the talks with Öcalan in İmralı, said HDP’s participation in the elections as a political party is against the solution process."

The former HDP co-chief was jailed in November 2016 in a crackdown. Nine MPs including Demirtaş and other co-leader Figen Yülksekdağ remain in jail.