The compensation cases brought by the victims of the Ankara Train Station massacre to the Ministry of Interior began to be concluded. After the decision of Administrative Jurisdiction, the Ministry of Interior sent a letter to the victims' families to obtain its own attorneys’ counsel fees ranging from 4000 to 12000 Turkish liras (700 to 2100 USD) 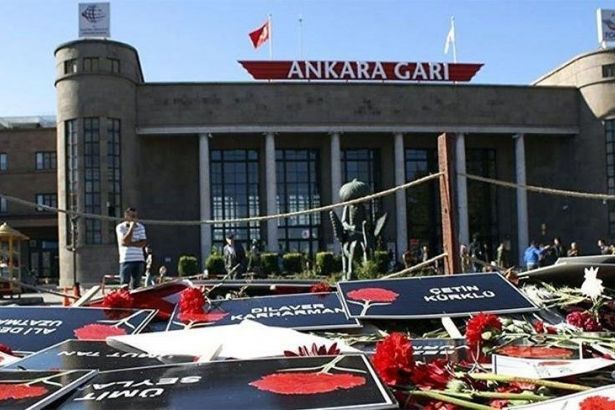 The compensation cases on the grounds that the institutions of the state are flawed in the bloodiest attack in Turkey’s history, in which 103 people were killed and hundreds were injured, have nearly been completed.

The Ministry of Interior now demands from the families of the victims the state attorneys' counsel fees, the amount of which exceeds the compensation to be given to the families.

On October 10, 2015, the Rally for Peace was to be held in Ankara, with the participation of several political parties, unions, and non-governmental organizations. While the masses were marching towards the rally site, two bombs were detonated in three seconds on two different points in front of the Ankara Train Station. The youngest one being an 8-year-old boy, 103 people were killed in the massacre.

“THE STATE HAS NO DEFECT BUT COMPENSATION SHOULD BE PAID”

As reported by Özlem Akarsu Çelik from Gazete Duvar, Nuray Özdoğan from the Lawyer Commission of the case evaluated the decision:

“Financial and moral compensation decisions were issued for the relatives and victims of the massacre. However, administrative jurisdiction, instead of investigating the responsibility of the state institutions such as criminal jurisdiction, applied the principle of social risk, which requires non-defective social responsibility in cases that it sees as part of a terrorist attack. In other words, ‘the state has no defects, but compensation should be paid in accordance with the social risk principle.’

“In the case of non-pecuniary damages, the administrative jurisdiction accepted the amount well below the claim and ruled the attorney’s fee in favour of the Ministry of Interior for the rejected part in accordance with the legislation. However, there was neither a description of the pain and grief nor the price of them. The administrative jurisdiction did not give reasons for the part it rejected", told the attorney.

"The decision on rejection ultimately meant that they could not have suffered so much pain and grief," she added.

On October 10, 2015, in the following minutes of the bombings, the police arrived at the scene long before the medics, and prevented people by tear gas and pressurized water from aiding the injured, blocking the way of the ambulances. What the government did right away was, on the other hand, imposing a broadcast ban on the massacre, slowing down the Internet connection, and banning various websites.

A Turkish court has sentenced in August 2018 nine Islamic State suspects to life in prison over their involvement in the massacre.