'Turkish gov’t cares nothing about people but interests of capitalist class amid COVID-19 pandemic': Kemal Okuyan

Speaking at the 100th-anniversary event of his party on Sep. 12, TKP General Secretary Kemal Okuyan, held the ruling Justice and Development Party responsible for the country’s ‘‘out-of-control’’ COVID-19 pandemic, saying that the lives of people have no value in this bourgeois/capitalist system. 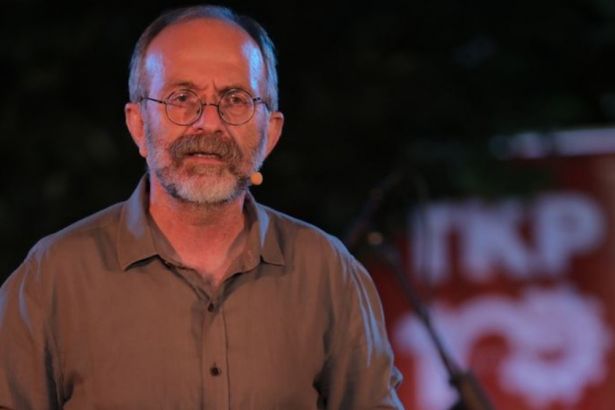 As Communist Party of Turkey (TKP) celebrated its 100th anniversary with a 2-hour live broadcast on September 12, TKP General Secretary (GS) Kemal Okuyan made evaluations about the course of the COVID-19 pandemic in the country and the world during the event.

Okuyan stated that TKP has suggested necessary measures that must have been taken in the country and all over the world from the earliest days of the pandemic to protect the public health, emphasizing that bourgeois governments have caused the outbreak to spread and grow due to their profit-seeking and anti-human policies.

‘‘We’ve encountered a pandemic that this social order we struggle to overthrow has been unable to cope with,’’ TKP GS Kemal Okuyan said, commenting on Turkey’s ‘‘out-of-control’’ pandemic under the Justice and Development Party (AKP) government’s failed disaster management amidst the COVID-19.

‘‘We are under serious circumstances during the pandemic and the government maintains its restrictions against the people on the pretext of the pandemic. Look, workers’ right to strike, which was already curtailed, has been completely banned now. Protests against political power or capitalist system and claiming any kind of rights have been forbidden,’’ Okuyan also noted.

‘‘Yet, on the other hand, capitalist exploitation continues at full pelt amidst the pandemic; injustice, inequality and oppression against labourers continue; unemployment and poverty incredibly rise. People are brooding on their future, and most of them have lost their hope, except for a handful of minorities,’’ he added.

Reminding the TKP’s suggestion, which is full quarantine across the country and halting all non-essential production as a response to the COVID-19 pandemic in its earliest period, Okuyan said, ‘‘Governments in Turkey and all around the world must have imposed an absolute quarantine for 15-30 days in order to reduce and eliminate the pandemic before it spread.’’

‘‘However, all bourgeois governments have failed to take necessary actions against the outbreak with their so-called quarantine measures. In these quarantines, some people stayed at their homes, but a significant part of the workers and labourers have been exploited amidst the COVID-19 pandemic. They have been forced to go their workplaces, to their factories, and continuing to use public transportation, because bosses called on the government to sustain production for the sake of their profits. Therefore, lockdowns, curfews, and quarantines imposed by the government and its pseudo measures have come to nothing.’’

TKP GS Kemal Okuyan also stated that as a result of his party’s field studies on the COVID-19, they identified three main areas in which the disease spread: closed workplaces, public transportation vehicles and hospitals.

‘‘If you [referring Turkish authorities] have failed to impose a full-quarantine across the country, you should have bosses minting money during the pandemic take necessary precautions now,’’ Okuyan continued, and added: ‘‘Workers who are infected with the disease in many factories are sent to their homes, while the contacted workers, who worked with the workers with the COVID-19, have been forced to work and exploited under serious risks of infection.’’

Speaking about the insufficient capacity of public transportation vehicles as the second major area leading to spread of the disease, Kemal Okuyan told, ‘‘When will you use the reserves of this country if you do not use them for the benefit of people under such pandemic conditions? But you disbursed that money as loans to the bosses in the country. You have burdened the country with debt for years, and now the national treasury is completely empty!’’

‘‘Yet, if the number public transportation vehicles were increased, the risk of infection would reduce,’’ Okuyan noted.

On the over-capacitated hospitals as the third area in which the COVID-19 pandemic spread, TKP GS Kemal Okuyan said, ‘‘Professional associations and scientists continuously warned that hospitals above a certain level of inpatient bed capacity are imprudence.’’

‘‘However, if there were hospitals of a certain scale at many more points during the pandemic today, if the first-line preventive medicine measures were correctly performed by the government, and if tests to diagnose the disease were performed at these hospitals, the pandemic would not have spread so much,’’ he underlined and added: ‘‘Because this disease does not spread in intensive care units of hospitals. It is spreading among patients waiting in lines at hospitals for medical treatment.’’

Saying that healthcare professionals take necessary measures while caring for patients in intensive care units, but when they leave there is no a safe place to breathe for them, and there are no healthy places to eat or drink tea due to over-capacitated hospitals, Okuyan noted, ‘‘This political power – and generally capitalist social order – do not care a hang about the lives of healthcare professionals.’’

Stating that Turkey is essentially a very rich country, but the peoples of the country have been impoverished by a handful of bosses and political power for years due to incessant government policies leading capitalist exploitation, Okuyan concluded that the only way out for people is socialism, a system defending the idea of ‘‘education and health cannot be bought and sold with money’’.