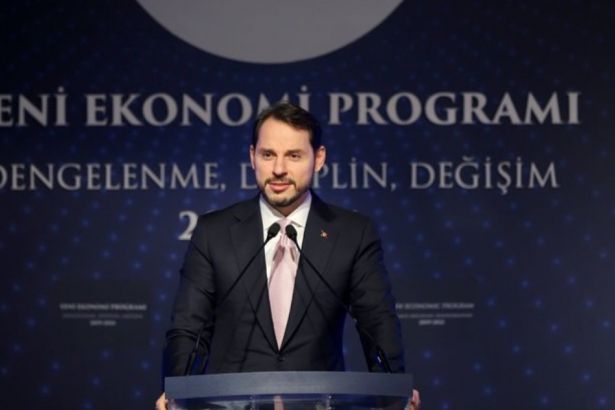 Turkey's Treasury and Finance Minister Berat Albayrak announced on September 20 the government's 'New Economic Program' covering some controversial goals like fiscal discipline, stabilization and transformation, yet the program seems to impose a comprehensive attack on the workers.

The program forecasts Turkey's GDP growth rate as 2,3% for 2019, indicating to a possible shrinkage despite the claims of President Recep Tayyip Erdoğan who recently said, "There is no crisis, do not be fooled by that. These are all manipulations. There is no crisis here. We are marching towards the future and becoming stronger every day. We will become stronger."  However, as the unemployment rate is expected to rise to 12,1%, the inflation forecast is 20,8% for the end of 2018 and 15,9% for 2019.

In comparison to the previous mid-term programs, the 'New Economic Program' seems to prioritize some new goals regarding the "structural transformation", particularly with the aim of decreasing the country's high current account deficit by means of investments of technological transformation. The program revises the focal points of the 10th and 11th Development Plans, focusing on a reducing dependency on importation and a decreasing current account deficit.

As the unemployment rate was forecasted as 11,8%for 2018, the government's recent economic program expects an increasing trend with 12,9% in unemployment for the next year. The part titled "Politics and Measures" from the chapter "Growth and Employment" reveals that the government's economic program is turning 2019 into the year of attack on the labour.

"The needs and choices of public institutions and employees will be harmonized. With flexible working models that will be implemented in accordance to the features of services, the employees will be enabled to spare much more time to their family and social lives, courses and training programs thanks to the balance of job and living. With flexible working, the public institutions will be provided with job satisfaction and a highly productive workforce," the program reveals a comprehensive attack on the public sector.

"A reform in severance allowances will be carried out in pursuance of the agreements of social parties," it notes, and it projects to actively implement half-time working payments, revealing yet another attack with government's preparations for mass dismissals in private sector.

The program chapter on inflation shows a decline in real wages. Although it says, the inflation forecasts rather than previous inflation rates will be taken into account in specific fields subject to the authority of public pricing policies, the previous data will be considered in determining minimum wages and public purchases and services. In other words, considering the forecasted inflation rate of 15,9% for 2019 instead of the rate that is expected to increase as high as 25% in 2018 indicates to a sharp decline in real wages for the millions of workers.

The goals of the 'NEP' on budget and current account deficits reveals a highly optimistic view from the point of the government. The program claims to reduce public indebtedness with higher tax incomes, i.e. with privatizations, considering that budget deficit is forecasted as 1,9 in 2018 and 1,8 in 2019. Moreover, Turkey's current account deficit inevitably appears to exceed 3,3% in 2019 particularly due to the country's high dependency on importation.

The new program projects new investments in pharmaceuticals, chemistry, petrochemistry, energy, machine/hardware and software sectors, and industrial districts where high-tech products will be produced with domestic and foreign investors as part of a "structural transformation". However, the project appears to be disputable as it would take at least 3 to 5 years to reach a successful result.

The program chapter, "restructuring financial debts", regarding the banking sector, projects to restructure Turkey's Development Bank, expand the Eximbank funds, as the public sector is to undertake the debts of commercial banks and the private sector to some degree.