Turkey's ruling AKP party has published a report on the Free Syrian Army (FSA) terrorists. In the report, it is argued, for example, that "some malevolent claims that FSA has links to Al-Qaeda does not reflect the reality". SoL responded to the main points claimed in the report in following points 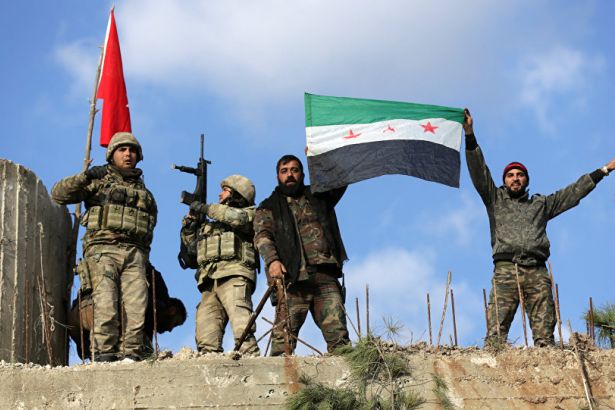 AKP’s Department of Media and Publicity has published a report on the Free Syrian Army (FSA) that partnered with the Turkish Armed Forces in Afrin operation. The report consists of "answers" to some questions on FSA such as who they are and why they have been targeted. In the report, it is argued, for example, that "some malevolent claims that FSA has links to Al-Qaeda does not reflect the reality". SoL responded to the main points claimed in the report in following points"

1) On the claim that the FSA was formed against "violence of the regime":

The AKP report claims that "FSA is a military structure which was formed by the Syrians who were opposed to the regime’s use of violence and led by military officers such as the Syrian Army defectors Lieutenant Colonel Hussain Harmush and Riad Al-Asaad".

This is a widespread distortion that has been used by the countries which seek for the regime change for 7 years. The truth is that since March 2011 in Syria, there have been "armed opposition" groups on the ground and these groups have been attacking to the Syrian army, state officials and even those who they name as "pro-Assad".

19 soldiers in Dera and 9 soldiers in Tartus were killed by the "armed opposition" on April 1 and April 8, 2011, respectively. These attacks have been shaped into a new form after the retired General Khedr al-Telawi and his nephew were killed in Homs. However, according to the Western press that was trying to continue the lie that says "the first demonstrations were peaceful", these attacks were done by Assad "who is trying to represent the opposition as terrorists".

Representation of Hussein Harmoush as one of the founding figures of the FSA in AKP’s report is controversial with the argument that "the FSA was formed against the violence of the regime". Fleeing to Turkey right after the first conflicts in Syria, Harmoush escaped to Jisr ash-Shugur on the Turkish border with his men on June 6, 2011. He killed 120 people among whom there were policemen and officers and then threw their bodies to the Asi River by breaking them into pieces.

This gory murder, however, was presented as the following lie: "There was a rebel going on against Assad in Jisr ash-Shugur. After the military personnel and policemen participated in the rebel there, Republican Guard led by Assad’s brother Mahir Assad massacred". But this lie also collapsed after the journalists including Hediye Levent working for AA entered the town that the Syrian army took the control of, and talked to the local people.

2) On the claim that the FSA was formed by Syrian opposition:

The report also claims that "Although it was initially formed by defectors, the FSA then included Syrian civil opposition and was trained by the Friends of Syria group. Currently, there are several Arab, Turkmen and Kurdish groups in various sizes".

Two consecutive statements of the Turkish President Erdoğan refute the AKP report that claims the FSA was formed by the Syrian opposition. Criticizing the US aid given to Syrian Democratic Forces (SDF), whose backbone is formed by YPG, in the name of the fight against Islamic State (IS), Erdoğan stated in December 5 that:

We are not going to just watch the attempt of constructing a terror state right beside us by those who attempted to crucify us in the US. You, the US! We built the Free Syrian Army together.

On December 29, Erdoğan responded to the criticisms about Turkey’s partnership with FSA in Afrin by stating that:

FSA is not a terrorist organization; it was an organization that the US told us to build together in the very beginning. It is a movement composed of the moderate opposition.

These statements clearly show that the claim "FSA was formed by Syrian opposition groups" is totally unrealistic.

In 2011, the armed forces on the ground were tried to be brought together by the US, Turkey, Saudi Arabia and Qatar. This resulted in the formation of the base of FSA in July 2011. After forming the base, the well-known "train and equip" program of the CIA started. Qatar and Saudi Arabia financed the program that turned Turkey and Jordan into the centres of logistic and training of the armed groups.

In 2012, showing the US officials as their sources, New York Times wrote that the coordination was "organized by the CIA agents in the south of Turkey".

Following this development, it was shown that there was an operating room used mutually by the intelligence of Saudi Arabia, Qatar, the US, Turkey, England, Jordan and France in the south of Turkey and the room is used to identify which armed groups would be supported on the ground. This coordination centre named as "Antakya Operation Room" was also controlling the operations of the armed groups. Therefore, the "national and native" FSA was a result of this joint operation and its moves on the ground had also been controlled by these countries.

3) FSA was not an army but a signboard:

Along with the conflicting interests and aims of the groups on the ground, the difference among the aims of Saudi Arabia and Qatar-Turkey prevented FSA to become "a central structure". However, groups on the ground expressed their submission to FSA despite the lack of a central command. This kind of a structure had been beneficial in the diplomatic relations, although it prevented the proponents of regime change from achieving their objectives on the ground in Syria.

As a matter of fact, when those groups who expressed their submission to FSA acted together with Al-Qaeda or took part in massacres, it was stated that "FSA’s central command has no such a decision". But when the same groups moved towards the Syrian army, it was presented as "FSA's success".

Ahrar al-Sham was formed before the conflicts started in March 2011 in Syria by the personal courier of Osama Bin Laden, Abu Khaled al-Suri. When Al-Suri formed Ahrar al-Sham, he was carrying Laden’s successor Eyman ez-Zevahir’s title of "Bilad al-Sham" (the world of Damascus). Al-Suri was such a prominent Al-Qaeda figure that can be a mediator to solve the problems between the successor of Hay'at Tahrir al-Sham, the al-Nusra Front, and Islamic State in 2013.

Some of the founders of Al-Qaeda who were killed by the Syrian Army were not aligned with the al-Nusra Front nor Hay'at Tahrir al-Sham but with Ahrar al-Sham. In the Idlib conflicts in July, the group of Nūr ad-Din Zengi, that is one of the components of Operation Olive Branch today, went for supporting Hay'at Tahrir al-Sham against the coalition of Ahrar al-Sham and some FSA groups.

4) Free Syrian Army can well be linked to Al-Qaeda:

AKP’s report totally denies the links between FSA and Al-Qaeda. The report states that "the FSA and the Al-Qaeda element in Syria, which became al-Nusra later, had serious conflicts and these two structures located themselves in two opposite poles by their ideological differences". "The fact that the FSA’s leading figures mentioned above came from the regime’s central structures such as the Air Force invalidates and makes it unnecessary to search for Al-Qaeda ideology in such a structure led and designed by these figures", it adds.

Although the report claims that FSA has no links with Al-Qaeda, FSA’s record of 7 years in Syria contradicts with this claim. As a matter of fact, several FSA groups were together with the Al-Qaeda linked-al-Nusra Front and Ahrar al-Sham groups in the attacks targeting Idlib near the Turkish border in March 2015.

In addition to that, it was taped that the militants of al-Nusra and ISIS were crossing the border freely after the Kessab attack in March 2014.

Although the report claims that FSA has conflicts with Al-Qaeda linked groups, this has been happening only within the last few years and rarely. In October 2015, a pro-"moderate opposition" journalist in Syria admitted that FSA gave the TOW missiles taken from the West to Al-Qaeda.

Even before that, FSA, al-Nusra and ISIS were all together in the Alevi massacre happened in Latakia in November 2013.

On the other hand, Erdoğan’s calls to the west to include Al-Qaeda’s Syrian branch al-Nusra into the "moderates" by stating that “they fight against ISIS” are still one of the most remembered scandal statements.

The group of Nūr ad-Din Zengi that participated in Afrin operation recently is known with cutting a 12-year-old boy’s head off in Handarat refugee camp in Aleppo.

5) The past relationship between FSA and ISIS:

Contrary to the recent situation, FSA was allying with Islamic State jihadist group before 2014. A well-known indicator of this relationship was the conflicts happened in Ming Airbase in the north of Aleppo in August 2013. After the FSA leader Ukadi had the control of Ming Military Airbase together with Islamic State and other jihadists groups, he made a statement saying that "our relationship with our brothers in Islamic State is very good".

Additionally, the October 2013 report of Human Rights Watch titles as "you can still see their blood" revealed that Ahrar al-Sham group, that is aligned with Turkish Armed Forces in Afrin today, did the Alevi massacre in Latakia together with Jaish al-Muhajireen and el-Ensar, which were composed of ISIS, al-Nusra front and Chechen jihadists.