Turkey's Council of Ministers has banned the glassware workers' strike under the pretext of "threat to national security". Turkish government has banned many strikes during the ongoing state of emergency 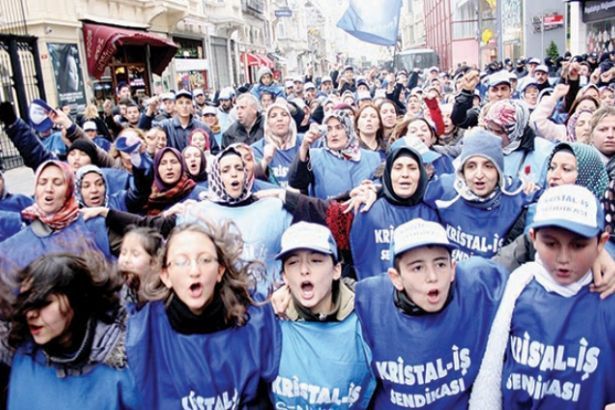 Turkey’s Council of Ministers “postponed” a worker strike for 60 days under the pretext of “threat to national security”. The decision was declared on the national Official Gazette on May 22, 2017.

The workers of Şişecam, Turkey’s biggest glassware company, were to launch a strike on May 24 with trade union Kristal-İş. According to Turkey’s trade union law, the postponement of the strike means a ban not a delay since the trade unions whose strikes are postponed cannot go on strike after 60 days and thus obliged to accept the employer party’s offers.

The collective bargaining process that started between the glassware workers’ trade union, Kristal-İş, and the employer on December 12, 2016, has ended up with disagreement, and the trade union declared on May 8 that the workers will go on strike on May 24.

Yet another strike of the glass workers’ trade union was unlawfully postponed under the same pretext in the year of 2014, and the appeals to the Council of State and the Constitutional Court remained inconclusive. Back then, the trade union also appealed to the International Labour Organization (ILO), and the appeal was put into operation.

Turkey’s glassware trade union Kristal-İş’s strikes have always been postponed. After a strike was delayed again in 2003, ILO condemned the postponement of the strike.

The last “postponement” became the twelfth ban imposed by the ruling Justice and Development Party (AKP). While 5,700 glassware workers are waiting for the decision of the authorised trade union, Kristal-İş trade union’s chair Bilal Çetintaş previously said, “The metal workers set an example for us,” referring to the decisive stance of the metal workers who continued the strike despite the government’s ban.

Meanwhile, many other unions of Turkey such as the Confederation of Progressive Trade Unions (DİSK) have made statements in support of the glassware workers’ strike; emphasising that the AKP government makes unconstitutional decisions at the expense of the workers, thus the ruling party continues to govern the country under the state of emergency.

As Turkey’s President Recep Tayyip Erdoğan returned his AKP party as its chair at an extraordinary party congress on last Sunday, he said that the state of emergency would not be lifted until Turkey achieves “peace” and “welfare”. However, the Turkish government has banned many worker strikes during the ongoing state of emergency, creating a ‘peaceful environment’ only for the capitalist class.

Erdoğan: 'How dare you ask us to lift the state of emergency?'