Turkey’s National Defense Minister Hulusi Akar made statements on the “energy projects” in the eastern Mediterranean, saying that the projects that try to keep Turkey outside the equation are doomed to fail. 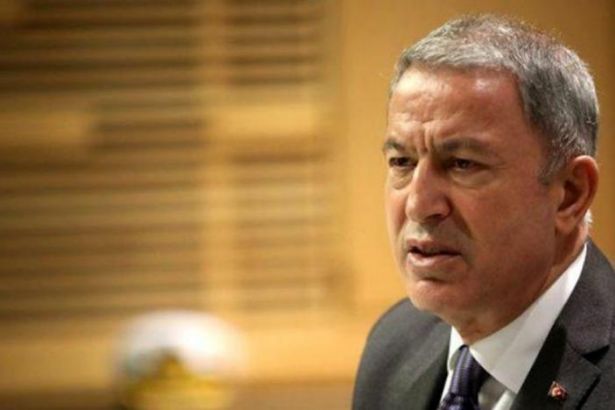 Turkey’s Minister of National Defense, Hulusi Akar, made statements about the developments in Libya and the Eastern Mediterranean and the crisis of S-400 and F-35.

According to reports of the state-run Anatolian Agency (AA), Akar, talking at the on-line panel held by the “Turkish Heritage Foundation” entitled “Turkey's National Defense Strategy and the latest Developments in the Region” said, “the energy projects keeping Turkey outside the equation are doomed to fail. We believe that peace and stability in the region can be achieved through dialogue.”

Akar state that Turkey’s aim is an independent and sovereign Libya, under the leadership of Libyans themselves, embracing all Libyans, whose territorial integrity and national unity is untouched.

“Some countries such as the United Arab Emirates, Egypt, Russia, France and Saudi Arabia claim that they support a political solution, but unfortunately they go on providing arms and military equipment to Hafter. This external support is the biggest obstacle to peace and stability in Libya,” Akar added.

'THE DESTINY OF THE REGION DEPENDS ON THE FATE OF TURKEY'

Pointing out that the US Congress is trying to apply sanctions against Turkey due to the purchase of  S-400, Akar said, "we believe intimidating language and sanctions are not appropriate ways to mark the differences between allies. But as Turkey and the United States did in the past many times, we fully believe that the bilateral relations between Turkey and the USA will take a more positive course.”

Akar said, "Geography is destiny, they say. In our case the destiny of the region depends on the fate of Turkey. I believe that the United States will notice this fact and give priority to Turkey as the major regional partner in coping with global challenges. I believe that if Turkey's improved partnership is facilitated, possible areas of cooperation will expand in the future for Turkey and the United States."

About the F-35 program, Akar argued that Turkey is not only a recipient of the F-35 program but also a partner. “We are ready to handle any concern of US about the compatibility of S-400 and F-35 in technical sense,” he said.

Ankara supports the GNA headed by Fayez al-Sarraj and has sent troops to Libya as part of a military and maritime cooperation agreement signed with the Tripoli-based government fighting against the LNA.

Last week, Turkey’s Foreign Minister Mevlüt Çavuşoğlu stated that the GNA will agree to a ceasefire in Libya only if Khalifa Haftar withdraws his Libyan National Army (LNA) from the regions in key central and western parts of the country.

In the mean time, the U.S. Air Force was announced to purchase eight F-35 jets originally produced for Turkey after Ankara was expelled from the Joint Strike Fighter program.