Leyla Alaton, a Turkish businesswoman and board member of the capitalist group of Alarko, has declared Turkey’s Islamist President Recep Tayyip Erdoğan as a “feminist” 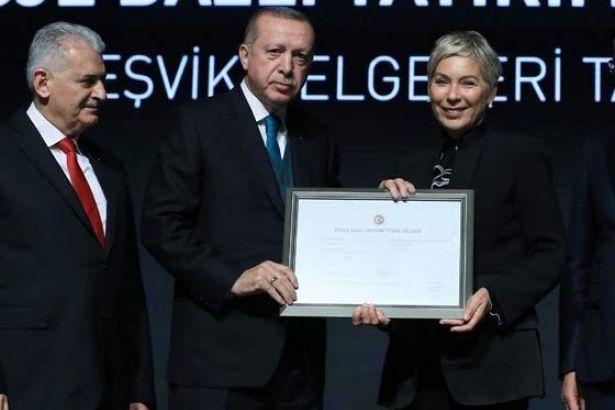 Talking to pro-government daily Sabah, Alaton said: “I find our President very feminist. You can see that if you look at the women around him. Her wife, Mrs. Emine, is extremely strong, someone who knows what she wants, a decisive role model for our women. So are her daughters. All of them are well-educated, strong, hardworking and productive women.”

Alaton, who also describes herself as a feminist, further stated that Erdoğan’s previous statements about the women were “falsified” when he claimed that women and men were different.

However, Erdoğan has occasionally repeated his discriminatory words, and said that “women are not equal to men”. Adhering to an Islamist perspective, Erdoğan is also known to have criticized the feminists for “rejecting the idea of motherhood”.

As Erdoğan suggests that “manual work is unsuitable for the delicate nature of women”, and ascribes motherhood to women, millions of women workers, like the men, are forced to work under harsh and exploitative conditions in return for low wages around Turkey.

The pro-capitalist initiatives of the ruling Justice and Development Party (AKP) at the expense of the working class lie behind Alatons’s complimentary statements for Erdoğan and his government.

One of Alaton’s companies, Alvimedica, the İstanbul-based manufacturer of medical instruments and supplies, is among some capitalist conglomerates that received super incentive certificates provided by Erdoğan’s government in April 2018. Alaton’s medical company had also purchased the Italian company in 2013.

Alvimedica is reported to take the support of Israel, one of the leading countries in medical technology, in the field of technology and transfer of information. During the ceremony of Erdoğan’s super-incentive project for the capitalists in April 2018, Alaton and Erdoğan had a sincere dialogue to further improve the business relations between them.

Turkey’s capitalist class has skyrocketed its profits while the working people have become further impoverished during the rule of AKP for the last 17 years. The bosses have apparently supported Erdoğan and his government from the very beginning, particularly when they faced political crises.

16 years under rule of Erdoğan's AKP: 'resurrection' for capitalists, poverty for workers