The working class of Turkey commemorates the 50th anniversary of the great workers' resistance of June 15-16, 1970, marking a historical movement that showed a great determination against the capitalist class and its political representatives by not stepping back from the demands over the right to organize. 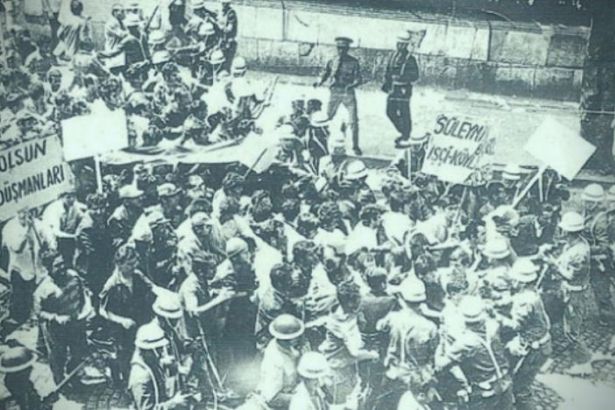 15-16 June is commemorated by the working class of Turkey as the anniversary of one of the most important and widespread workers resistances in the country. On 15-16 June 1970, tens of thousands of workers went on a strike and demonstrated in the city centers, marking one of the cornerstones of the labor movement in Turkey.

In its daily podcast, the Voice of TKP, the Communist Party of Turkey (TKP) has greeted the great resistance, noting that no one can erase the memory of the 15-16 June. TKP reminded that the 1960s was a period during which the working classes in Turkey were awakening politically, ideologically, and culturally. The Confederation of Progressive Trade Unions of Turkey (DISK) was established and declared its independence from the Confederation of Turkish Trade Unions (TÜRK-İŞ) which was rather submitted under government supervision.

DISK represented the labor movement of the 1960s. The establishment of the Workers' Party of Turkey (TIP), which was pioneered by labor unionists, progressives, and socialists, and its entrance to the Assembly coincided with the same years. Many labor rights including the right to strike and practices of unionization were achieved through the struggle of those years. The organized labor struggle strengthened and politicized workers. The biggest threat to the bourgeois rule emerged: Workers who know what they want and are on their feet to get it.

15-16 June was a reaction against the measures taken to prevent the rise of the organized proletariat. The working classes responded shouted, "You cannot take decisions for us without us!"

With this aim, the workers were determined to get what they deserved and they were united at the factory and continued with their protest on the streets on 15 June 1970. They were quicker than labor unions and they spread the resistance in Istanbul and Gebze where production was centralized. The resisting workers were highly numbered in industries of metal, chemicals, rubber, cable, food. It included not only DİSK members but also TÜRK-İŞ members. On 16th June, the government sent police to disperse the mass protests. The protesters did not stop despite the police.

The capitalist class increased the volume of its attack after the resistance, targeting leading workers, unionists, and revolutionary youth.

The Voice of TKP reminded, on its podcast, that on its 50th anniversary, 15-16 June reminds us of the power of organization against the bourgeoisie. "If the proletariat wants more than what it is given, the real struggle begins. 15-16 June is a real struggle like this. The ones who create life stood on their feet and fought for an independent and widespread fight. They owned their own organization," TKP said. "The resistance will eventually win," it added.