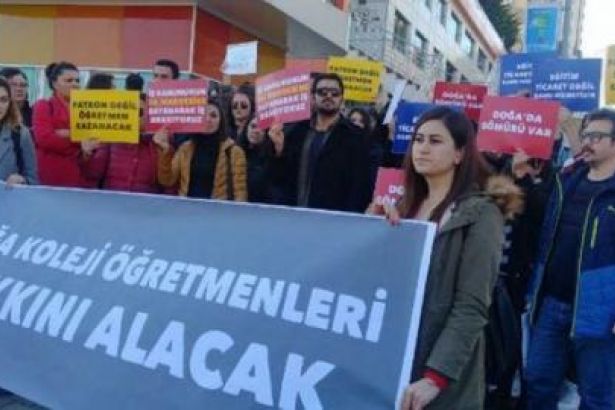 Having been suffered a long-term crisis in recent years, the Turkish economy is now facing the fact of the pandemic. The capitalists are able to carry over their business through incentives and facilitation as millions of workers go through hardship caused by the menace of disease and fear of unemployment at the same time. The governmental measures against the health crisis are solely based on sliding over the needs of the masses while not refraining from prohibiting strikes, collective bargaining and so on.

Constituting a prominent platform against the conditions of working class in Turkey since 2018, PE (We Breathe Down the Bosses’ Neck) solidarity network does not only serve as a call center that receives complaints about bosses but is an entity for a struggle where working people get organized.

Thus, soL interviewed Zehra Güner, a contributor to the network on the recent affairs of the entity and an expert on occupational health and safety.

Upon the reporter’s request for a brief sum-up of what PE is about, Güner said that it is mainly solidarity, communication and struggle network formed up via the call of Communist Party of Turkey (TKP) by experts, lawyers, union officials, doctors, workers, TKP members and volunteers in late 2018 that is now quite widespread throughout the country.

Güner also stated that lots of workers subjected to disputes varying from mobbing in the workplace to unlawful discharges, unpaid payments and indemnities, occupational safety and health issues, overtime work, deception of workers in terms of legal issues and so on. She added that after the workers contact the network through social media or telephone PE reaches to the applicant and try to facilitate a lawyer for legal aid and mostly an interview in person.

Furthermore, the PE contributor mentioned that conditions of some workplaces do not allow the wide organization of workers while most of them do and, if that is the case they only provide information on what their rights are at least. She also noted that PE features those applications and their results on the internet site and social media accounts of the network on the consent of the workers.

In addition, Güner marked that PE has cumulated lots of experience through the recent struggles since 2018 in lots of sectors from tourism to construction, private education, textile, accommodation, etc.

As the reporter asked whether the pandemic affected the agenda of the network, Güner replied that the calls have significantly intensified. Underlining that the health crisis did not create a specific focus on the variety of workers from any sectors as lorry drivers, private school teachers, metal workers, hotel employees are among the applicants, she yet witnessed actual effects on different industries of how the disease progress. For example, the first time intercity traveling was prohibited, construction workers most of whom are from other cities suffered hardships as they were discharged from work as they had no money and nowhere to go, literally left on the street. We met with the workers and showed solidarity. One other featuring example is the private school teachers whose sectors suffer real setbacks as education in person is suspended and turned to online lessons.

Upon the question addressed by the reporter on whether it is possible to classify the subjects of the disputes of the applicants, Güner stated that the most encountered types are forced unpaid leaves, or forced annual leaves without the workers’ discretion, forced resignation, unlawful discharges, and occupational safety and health violations. She added that the pandemic did not affect the pace of the affairs of the network as there are lots of workers’ committees in lots of workplaces subjected to applications of the workers, most of them being in private schools, cargo services, shopping centers, and energy provision sectors.

Besides, Güner remarked that Turkish OHS legislation contains a provision about right to refrain from work in OHS violations in the workplace if any, which has recently become another spreading legal dispute among workers and bosses as the latter try to fudge their liabilities through making deceiving paperwork.

Lastly, as the reporter asked whether short time payment (a regulation that works quite similar to unemployment insurance where state partially pays lacking worktime) is good for the workers, Güner marked that even though some bosses very exceptionally still keep paying their workers and so, no matter what, workers are underpaid in this case. She also emphasized that there are bosses who requested short time payment and acquired it still apply fulltime work for their workers or call their workers back once they acquire it, which are totally illegal. She also stated that contrary to what the name suggests, the so-called layoff ban draft is not really about a ban but is actually legalizing a type of unlawful discharge.

We Breathe Down the Bosses’ Neck Solidarity Network has been serving for one and a half years now as an entity where working people communicate and organize through which in most occasions managed to carry their efforts to ensure their rights and remove their problems via their own unification.