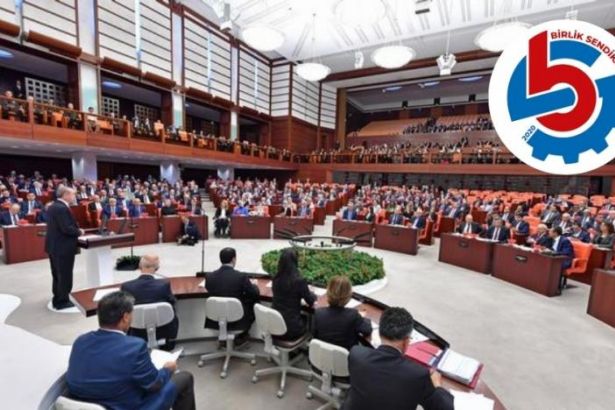 Turkey's Unity Trade Union reacted to the regulation that the AKP government brought to the agenda of the Assembly, which included heavy attacks on workers' rights.

In the statement made by the union, "Incentive to the Boss, Flexibility to the Worker! We Do Not Want to Work Flexible hours and Unsecured!" titles stood out. The statement called for unity and said; "Let's raise unity and solidarity on the labor front against this great attack from the capital front. If they are after dividing and de-unionizing, let's get organized to claim our rights and stop exploitation, let's be unionized."

Incentive to the boss, flexibility to the worker!

We do not want to work flexible hours and unsecured!

The "Law Proposal on Amending the Unemployment Insurance Law and Some Laws", which started to be discussed at the Turkish Grand National Assembly on Tuesday, November 3, has packed the attack of flexibility, insecurity and de-unionization in one bag.

It aims to usurp the most fundamental rights of laborers with this Omnibus Bill, in cooperation with the bosses and the government. Before the earthquake debris is lifted and while rescue efforts continue, a new disaster opportunism is on the way in our country.

Since the beginning of the epidemic, all kinds of incentive and convenience have been provided to the bosses, while short-time work allowance and unpaid leave have been imposed on the worker. Now a new one is being added to the epidemic regulations. Conditions imposed for employees under 25 and over 50 to work with fixed-term employment contracts are removed. If this regulation is passed, the severance and notice pay rights of these segments, which make up about a quarter of their total paid employment, will be endangered. Employees with fixed-term employment contracts will not be entitled to severance and notice pay, nor will they be able to file a reemployment lawsuit.

This massive flexibilization attack also includes the expansion of partial work. Partial work is encouraged, paving the way for workers to work for lower wages, without security and with reduced social rights.

In addition, the Omnibus Bill regulates the employment of young workers under the age of 25 who work less than 10 days a month without paying retirement premium. The retirement right of young people employed in this way is further postponed.

By these regulations, they want to divide, segregate and in this way disorganize the already fragmented working class.

They are trying to eliminate our right to severance pay in a different way. They want to exploit more by work flexibility and intensive workload.

The bill also gives the President authorization to extend the unpaid leave and short work practice until the end of June 2021. This practice has caused misery to the worker who covered for the bosses in the epidemic.

On the other hand, bosses who employ unregistered workers will be pardoned, and the President is authorized to reduce the corporate tax paid by companies. The government prepares the conditions for the further exploitation of the worker when making cool regulations for bosses through incentives, convenience and tax reductions. Moreover, all these incentives given to bosses will be covered by the Unemployment Insurance Fund accumulated by the hard work of the worker.

The side of the AKP government is clear, it works for the bosses as the main component of the capital front. They do what the bosses' organizations say.

Our rights cannot be negotiated or discussed through dialogue. The Omnibus Bill should be withdrawn immediately.

Let's raise unity and solidarity on the labor front against this great attack from the capital front. If they want to divide and de-unionize, let's get organized and become union members to claim our rights and stop exploitation.