As the negotiations for collective labor agreement between TÜPRAŞ management and Petrol-İş hit a deadlock due to the attitude of Koç Holding, workers initiated warning demonstrations in all refineries 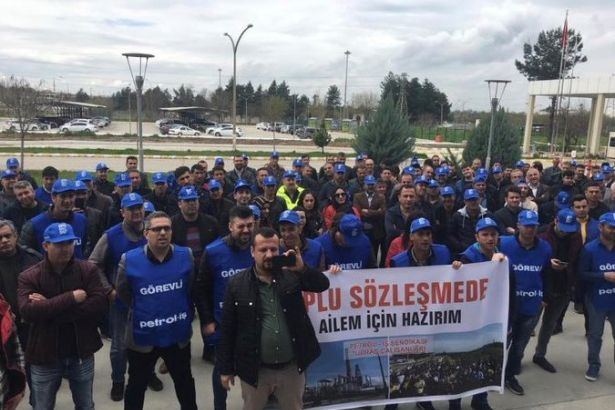 As Tüpraş management obstructed the collective bargaining negotiations, workers halted the production upon the call of trade union Petrol-İş.

Collective bargaining negotiations that concern 4,300 workers halted because Koç Holding left the table upon offering to "bribe". Koç Holding’s offer consisted of giving one extra salary for the following 6 months period by adding 1/6th of the monthly salary to workers’ normal salaries. Koç Holding also suggested that they might think of inflation adjustment to salaries in 6 months.

Trade Union Petrol-İş stated that they see this offer as a bribe proposed to the workers and such offer with malicious intentions cannot be accepted. Petrol-İş managers argue that the employer is counting on High Board of Arbitration’s decision, however, it is not possible to break their will in such ways.

According to Evrensel daily, Petrol-İş initiated demonstrations in 4 refineries on Monday, April 8.

Workers met in front of İzmir Aliağa refinery and hanged a banner in front of the refinery stating “I am ready for Collective Bargaining Process for my family” in order to show their determination.

Petrol-İş branch president Ahmet Oktay criticized the attitude of Koç Holding during the negotiations and stated “Koç Holding’s counteroffer only consisted of an additional salary for the next 6 months. This means the base salary and shift premiums would not be improved. The employer in TÜPRAŞ offered a bribe to the workers. Our struggle will grow in the following days.”

Last month, after the owner, Koç Holding, changed the shift system to the detriment of the workers and did not agree to increase the duration of the collective labor agreement to 3 years, workers stopped working for two hours to warn the company management.

Turkey’s biggest oil-refinery operator TÜPRAŞ was privatized in 2006 by the AKP government as the Koç-Shell consortium took over 51 percent of TÜPRAŞ shares in exchange for 4.4 billion dollars.