The Turkish Industry and Business Association (TÜSİAD), Turkey’s top capitalist organization, paid a congratulatory visit to Istanbul's new mayor Ekrem Imamoğlu, who promised not to exclude anybody from the business and religious world 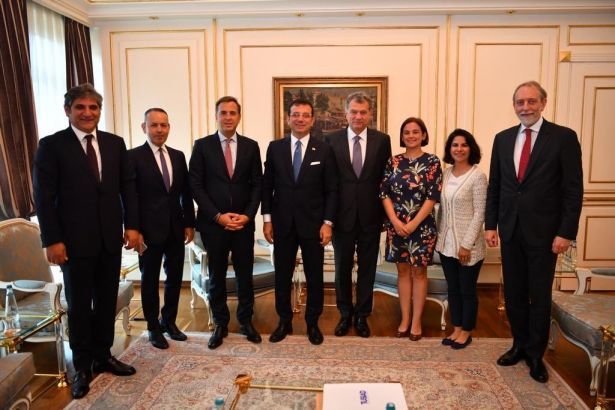 The TÜSİAD group, including President Simone Kaslowski and vice presidents, visited İmamoğlu on July 4 to congratulate him for his electoral victory in the repeated local elections in İstanbul on June 23.

Noting that İstanbul represents more than one-third of the Turkish economy, TÜSİAD President Kaslowski said, "Therefore, it (İstanbul) has an important place in Turkey's development. As TÜSİAD, along with our working groups and all-volunteer friends, we want to take part in the development of İstanbul."

Kaslowski congratulated İmamoğlu, adding that the new mayor will play a major role in the development of the country with his understanding of transparency and institutionalism in governance.

Following the statements of TÜSİAD president, İmamoğlu shared his views. He said that they would resort to an inclusive and cooperative approach in İstanbul without excluding anybody from the business world and the religious world.

"We want to benefit from the database of TÜSİAD that has really deep capabilities on this table of common sense, that has very special preparations in terms of social policies," the newly elected mayor told the reporters.

After taking his official mandate last week, İmamoğlu organized a religious ceremony with Islamic prayings on his first day of taking the office. İmamoğlu shared photos of the prayer in his office from his social media account.

İmamoğlu interviewed Sözcü daily after being criticized because of the religious ceremony in his municipal office. He claimed that his action was not in conflict with secularism because "the office is his personal space."

İmamoğlu previously announced that he would appoint Yavuz Erkut, the former CEO of TÜPRAŞ, Turkey's top oil refinery company, for the secretary-general office of İstanbul Metropolitan Municipality. TÜPRAŞ had been privatized and acquired by Koç Holding, one of the wealthiest family companies in Turkey.

New Istanbul mayor takes office with praying event, claims it is not against secularism