"Turkish President Recep Tayyip Erdoğan’s call for unity is very important to ease the international tension and to provide confidence in the markets", Tuncay Özilhan, Head of High Advisory Council of the Turkish Industry and Business Association (TÜSİAD) said, and added that acting with the ‘election economy’ for a long time has made it difficult to take necessary steps towards economic reforms 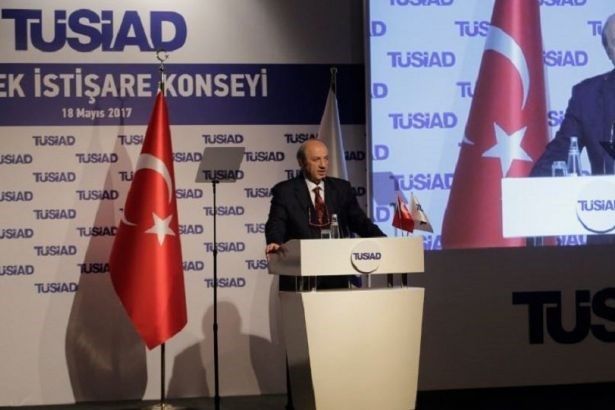 In the opening speech of the meeting, Tuncay Özilhan, the Head of High Advisory Council of TÜSİAD, stated: "It seems that the transition from the parliamentary system to the presidential system has not completed yet. The institutional structure of the presidential system in Turkey could not be established. It is obvious that the political tension will continue with the annulment of the local elections in Istanbul."

Saying that Turkey has been in an atmosphere of local elections for a long time and this situation damages the Turkish economy, Özilhan noted that governance problem in the country should be solved in order to overcome the economic distress.

"Turkish President Recep Tayyip Erdoğan’s call for the unity is very important to ease the international tension and to provide confidence in the markets", Tuncay Özilhan also underlined.

‘PURCHASING POWER OF THE PEOPLE DECREASED’

Stating that people’s purchasing power has decreased with the depletion of the reserves, Özilhan said: "Turkish citizens abstain from the Turkish Lira. Turkey is losing its power in the global competition. We are in 121st place in inflation. We are in the 111th place in the independence of the judiciary, 109th in the right to legal remedies, and 129th in freedom of the press. For this reason, the judicial system must be improved for economic recovery."

"If democracy becomes effective and an educational reform that paves the way for critical thinking is taken place, economic performance will increase in the country. Turkey has huge potential. Therefore, we will continue to emphasize democracy, judicial independence, and human rights, as we lay stress on the economy", he stated.

Noting that the social polarization in Turkey is getting deeper, Özilhan said, "The attack against the opposition leader [Republican People’s Party leader Kemal Kılıçdaroğlu] increased the political tension in such an atmosphere. With the annulment of the local elections in Istanbul, it has become clear that this tension will continue. Despite this, our citizens remain calm. The election results also indicate that the current polarization among the politicians has not been accepted by society. Our citizens want unity, not hostilities; and they showed it in the elections."

"Another problem is foreign policy. Apart from our own troubles, there are global problems as well", Özilhan said.

Stating that the tensions in international relations cause a sharp depreciation in the Turkish Lira and this sharp depreciation results in increasing costs, Özilhan noted, "We should not forget that the power of the states is based on their strong economic fundamentals. Economically weak countries suffering from financial problems become dependent on the countries with strong economies."

"There is a sense of confidence in the foundation of a strong economy. It is difficult to build confidence but it can be destroyed in one stroke. If we become polarized and do not trust each other, international actors do not trust us an inch", he added.

‘ERDOĞAN’S CALL FOR UNITY IS IMPORTANT’

Özilhan said that the Turkish President Recep Tayyip Erdoğan’s call for establishing a "Turkey Alliance" putting aside differences among the conflicting segments of society was very significant.

"We will join hands with all segments of society in unity to strengthen the economy and democracy", Özilhan concluded.

TÜSİAD: a history of organised exploitation