Turkey's solidarity network "We Breathe Down the Bosses' Neck" (PE) has sent a solidarity message to Greece's PAME that went on a general strike today against the government's new social security bill. 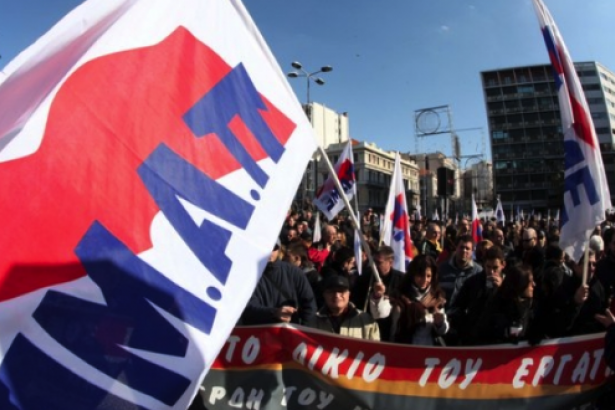 Following PAME's call on all workers, youth, retirees, freelancers, farmers, scientists and unemployed people on a strike on February 18, the working people of Greece took to streets in a massive and militant strike in more than 60 cities all over Greece.

The working class of Greece demanded Free-Public Social Security for all and cancelation of the anti-workers’ bill of the Government that privatizes Healthcare and Social Security, PAME reports.

From midnight workers all over Greece formed picket lines and stopped production. In Athens, all public transport was stopped.

Turkey's class solidarity network "We Breathe Down the Bosses' Neck" (PE) initiated by the Communist Party of Turkey (TKP) has sent a solidarity message, greeting the mass strike of the working people of Greece.

TKP's message is as follows:

We greet our fraternal organization PAME and the general strike of Greek workers on February 18.

In Greece, our class sisters and brothers are on strike today against the government's new social security bill in the public and private sectors. We know that the working class of Greece will give a clear response to this draft law that the Syriza government paved the way and the New Democracy government is trying to enforce rapidly. Anti-popular practices can only be repelled by the resistance of the working class.

Demands for public social security, free health care, lowering the retirement age, raising pensions and government guarantees for all citizens are legitimate. We extend our solidarity to the general strike called by our fraternal organization PAME, considering all these demands.

The communication, solidarity and struggle network "We Breathe Down the Bosses' Neck", which was initiated with the call of the Communist Party of Turkey (TKP) and which covers the workers organized under workplace committees and solidarity networks of sectors, greets the strike.

Long live the unity of the working class!

The communication, solidarity and struggle network "We Breathe Down the Bosses' Neck" (PE)