Approaching the anniversary of the foundation of the Republic of Turkey, Turkey’s left-wing intellectual initiative, Solidarity Assembly, has prepared important reports titled, "Towards a New Republic: From the Republic of Capital to the Republic of Labor". 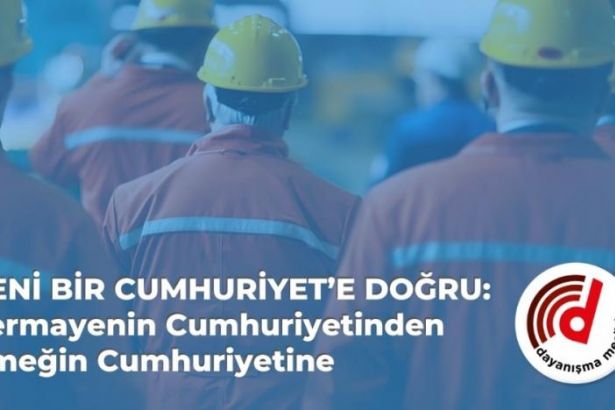 As the anniversary of the foundation of the Republic of Turkey approaches, the Solidarity Assembly prepared important reports. The first two of “Towards a New Republic: From the Republic of Capital to the Republic of Labor” reports titled as the “Industry - Development Report” and the “Political Economy Report” were shared with the public recently.

TOWARDS A NEW REPUBLIC: INDUSTRY-DEVELOPMENT REPORT

While Solidarity Assembly notes, “Approximately for 40 years, neoliberal policies has plunged Turkey into a low growth trap and made it dependent entirely outside,” in Industry - Development Report, underlining that “Today Turkey’s economy is exhausted with import dependent agriculture sector, the international division of labor at low wages and industry which has only done subcontracting function with high exploitation rate, the insecure and unorganized service sector and the growing structure on the plundering of their natural and cultural assets.”

“Today, a perspective that aimed to development and fair division in Turkey is important. Industrialization is one of the most important pillars that will serve these purposes. It should be emphasized that the final solution lies in socialism, beyond the current profit-oriented system.

Industrialization and development in a new Republic will be based on the following goals:

1) Planning will be transformed into a social goal, relations with the outside world and control mechanisms in this area will be designed “again” and “intelligently”.

2) Privatizations will be stopped immediately, and a comprehensive expropriation program, particularly in infrastructure investments, mines and strategic sectors, will be brought to the agenda.

3) Public investment will be effectively implemented.

4) Economic development and public investment planning will be carried out by taking advantage of opportunities for science and technology developments that cut across all sectors.

The State of Turkey will gain a developmentalist character with public policies and develop the structure of the real sector with modern improvements. Now we have to create a new movement for freedom and equality. This means a struggle for a new Republic. Now morethan ever we need a new and revolutionary Republic.

So LONG LIVE THE REPUBLIC!”

Another report prepared by the Solidarity Assembly is titled “Political Economy Report”.

In the report, the Assembly says, “All the objective and qualitative gains of the Republic, which was established 97 years ago with great dreams, were destroyed one by one under a pro-capital neo-liberal attack. It was sold, economic and fiscal policies were redesigned according to the short-term interests of capital, all mechanisms and intervention tools in favor of the working people were destroyed.”

The Solidarity Assembly which sees establishment of laborer’s republic is requisite for carrying out the objective and qualitative gains of the Republic to new generations and go beyond these gains, wants to be implemented these steps immediately:

1) All obstacles in front of the transition to a planned social economic model will be removed in order to eliminate the damage caused by the implemented neo-liberal program. The privatized and economically functioning Public Economic Enterprises’ will be nationalized and even more will be established within the framework of the social plan to be implemented.

2) By eliminating all legal and political obstacles to labor organizations, it will be ensured that these organizations are not only demanding institutions, but also institutions participating in management and planning.

3) The monetary and fiscal policies that have been implemented for the last forty years, based on keeping the wages of the laborer and the price of the product of the small producer and the peasant low will be abandoned immediately.

4) All mechanisms (minimum wage commission, labor law, free zone law, etc.) that cause the deliberate lowering of the value of the labor force will be completely abolished and replaced by the mechanisms where laborers and employees will

dominate in the decision-making process.

5) The Labor Republic will not be obliged to increase the employability of the unemployed, but to create employment for them.

6) The revitalization of the closed agricultural Public Economic Organizations will be the essential complement of the process of organizing the villagers around cooperatives.

7) The social planning mechanism has to establish a neat line that takes into account the technological infrastructure of production on a sectoral basis. As this will lead to a serious increase in labor productivity, it will cause employees to work for increasingly shorter periods. The freedom contract for the citizens of the republic will thus turn into a social contract that will go beyond simple physical and economic promises and provide them with a humane and dignified life.