Turkey’s Solidarity Assembly called workers to struggle for establishing a republic for the working classes after the determination of the minimum wage in 2021. 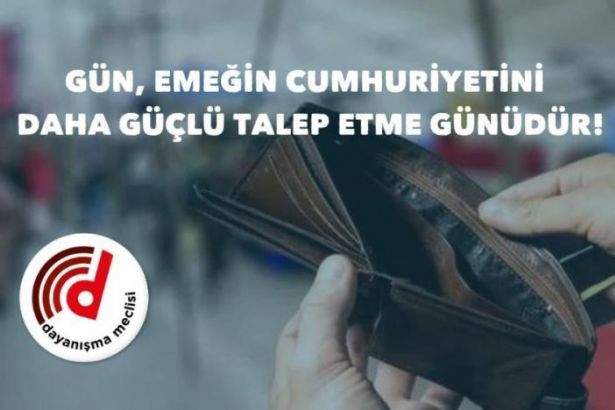 Turkey’s Solidarity Assembly made a statement calling for the establishment of a republic for the working classes regarding the minimum wage discussions.

The foundation of the Solidarity Assembly came after a congress resolution of the Communist Party of Turkey (TKP). Convened in August 2020, the 13th Congress of TKP called for the establishment of the Assembly in order to bring together the pro-enlightenment, secular, and socialist accumulation of the country.

Emphasizing the lack of representation of workers in determining the minimum wage, The Solidarity Assembly stated, “The republic of working classes will provide equality and decent wage and life for workers and entire society”.

In 2021, the minimum wage, which a large proportion of workers gets to survive, has been announced as 2825 TL (382$). In a country where the subsistence level of a family, the poverty line, is 8200 TL (1109$), even if two workers receive minimum wage in a family, it only can reach two-thirds of the poverty line! The minimum wage does not protect workers or their families; it just legitimizes the aggravated exploitation circumstances.

The calls of domestic capitalists to foreign investors have now begun with “we have very cheap labor” that will whet their appetite for exploitation. Foreign dependent capital, which has no willingness nor ability to be a part of the international competition through employing high-quality and high-wage labor in a high-tech economic structure, is now trying to make a place for themselves by racing towards the bottom in wages. However, the working class will not allow this looting. This road is already a dead end.

The minimum wage is a type of wage that concerns primarily workers, civil servants (public laborers), retirees, and the unemployed. The floors and ceilings of insurance allowances such as unemployment insurance allowance and short work allowance are also determined based on the minimum wage. In this regard, it concerns people much more directly and indirectly than is thought. The struggle for the minimum wage should be fought and organized, considering this broad social base.

The minimum wage, as usual, was determined by the interests of capital and government. The lack of representation of workers is the reason for this decision. Granting capital and its government to right to be represented with a weight of two-thirds is a clear indicator of the anti-worker class character of “The Minimum Wage Determination Commission”.

The Labor’s Republic will provide equality and a decent wage and life for workers and the entire society.

Therefore, this is the day to demand a republic for working classes stronger and to struggle for it.