President Recep Tayyip Erdoğan’s ruling AKP turned the opening of Hagia Sophia as a mosque into a religious show while social distancing rules were ignored around Hagia Sophia as thousands of people flooded into the streets around the iconic site for prayer amid the pandemic. 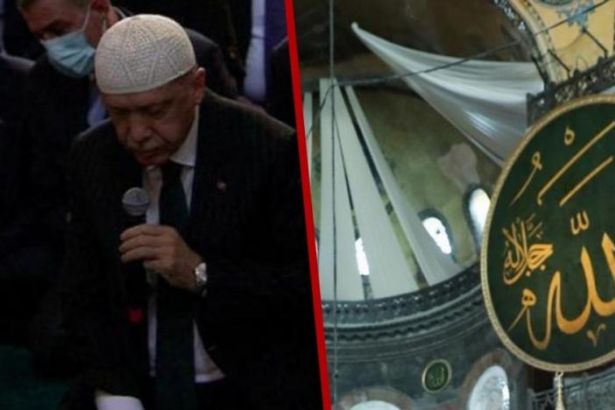 Crowded groups gathered on the ways reaching Hagia Sophia for the Friday prayer. At some points, thousands of people flooded into police checkpoints while ignoring social distancing without wearing protective masks against the COVID-19 pandemic.

As İstanbul Metropolitan Municipality announced, some tram and metro lines were closed in order to “prevent” big crowds during the day of prayer at Hagia Sophia. Shuttle bus lines were organized to carry the passengers around İstanbul.

While thousands of worshippers gathered in and out of Hagia Sophia, social distancing rules were ignored except some few people around Erdoğan were seen obeying the rules to protect the president.

Following the Friday prayer at Hagia Sophia, Erdoğan visited the tomb of Mehmed the Conqueror. “Now this place [Hagia Sophia] has returned to its original form, it has become a mosque again,” Erdoğan said, adding that 350,000 attended prayers around Hagia Sophia.

Ali Erbaş, the head of Turkey’s Religious Affairs, went up to the pulpit at Hagia Sophia with a sword as a symbol of the Ottoman tradition of conquest, and read out the Friday sermon.

“Sultan Mehmed the Conqueror endowed and entrusted this place on condition that it should remain as a mosque until the doomsday. Whoever violates the endowed is cursed,” Erbaş said.

Erbaş has been criticized by secular citizens because he implied and targeted Mustafa Kemal Atatürk, the founder of the modern Republic of Turkey, who had signed a decree that turned the iconic Hagia Sophia into a museum within the scope of secular revolutionary principles.

Built in 537, the Byzantine-era monument Hagia Sophia had served as a church until 1453 when the Ottoman Empire conquered İstanbul and converted the church into a mosque. A cabinet decree of 1934 turned the place into a museum under the secular principles of modern Republic of Turkey.