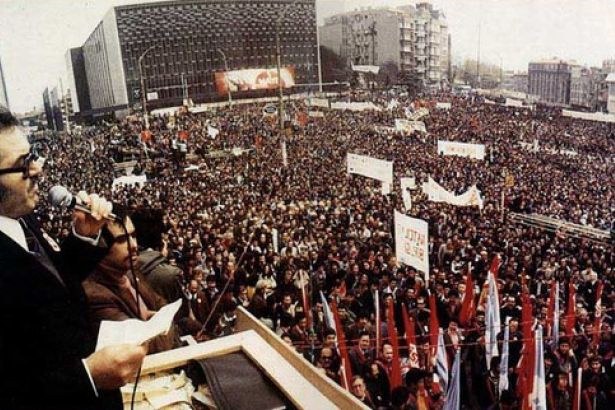 Kemal Türkler, the founder and first president of the Confederation of Revolutionary Trade Unions of Turkey (DİSK) and the former president of the Union of Mineworkers (Maden-İş), who was murdered by a fascist assassination on July 22, 1980, was commemorated in the 39th anniversary of his murder.

Many workers, trade unions and political parties, including the Communist Party of Turkey (TKP), attended the remembrance ceremony on Monday.

Kemal Türkler was a Turkish socialist labor union leader, who was the founder and the first president of DİSK and also one of the founders of the Workers’ Party of Turkey (TİP) in 1963. Türkler was assassinated on July 22, 1980, in front of his home in Merter, İstanbul by fascist militants from the Nationalist Movement Party (MHP).

As the period between 1960 and 1980 was marked by very significant milestones in the history of Turkey’s working-class struggle, including the Kavel Strike in 1963, 15-16 June Workers’ Resistance in 1970, and ‘‘Bloody May Day’’ in 1977, Kemal Türkler was one of the most prominent revolutionary figures of this period.

"KEMAL TÜRKLER IS LIVING IN OUR STRUGGLE"

The remembrance ceremony held for Kemal Türkler started with the slogans such as "Kemal Türkler is living in our struggle!", "The unity of workers will defeat the capitalists!", and "Capital is the Murderer!".

"We remember Kemal Türkler, the President of the leader of Turkey’s working class, DİSK, and Metal-İş, who was murdered by bloody-minded fascists 39 years ago. Kemal Türkler is a milestone for the working class of Turkey. Today, we have the power to resist against the attacks of the ruling Justice and Development Party (AKP) and the capitalist class thanks to the legacy left by Kemal Türkler," it is stated in the opening speech of the remembrance ceremony.

After the opening speech, participants stood in silent homage for Kemal Türkler and other revolutionaries who lost their lives in the struggle for the workers’ rights.

Adnan Serdaroğlu, the Head of the United Metal Workers Union (Birleşik Metal-İş), also stated: "We commemorate Kemal Türkler here upon his grave for 39 years. We come to this graveside for 39 years in an unyielding manner, and we have become more and more crowded every passing year. We know that we are on the right path, and we lay claim to our past. Even though [fascists] destroyed the body of Kemal Türkler, we carry on his legacy of class struggle and mass unionism today."

Underlining that the principles of Kemal Türkler are the guiding light for the metal workers today, Serdaroğlu noted: "Workers continue their struggle against the capitalist oppression in light of his principles." 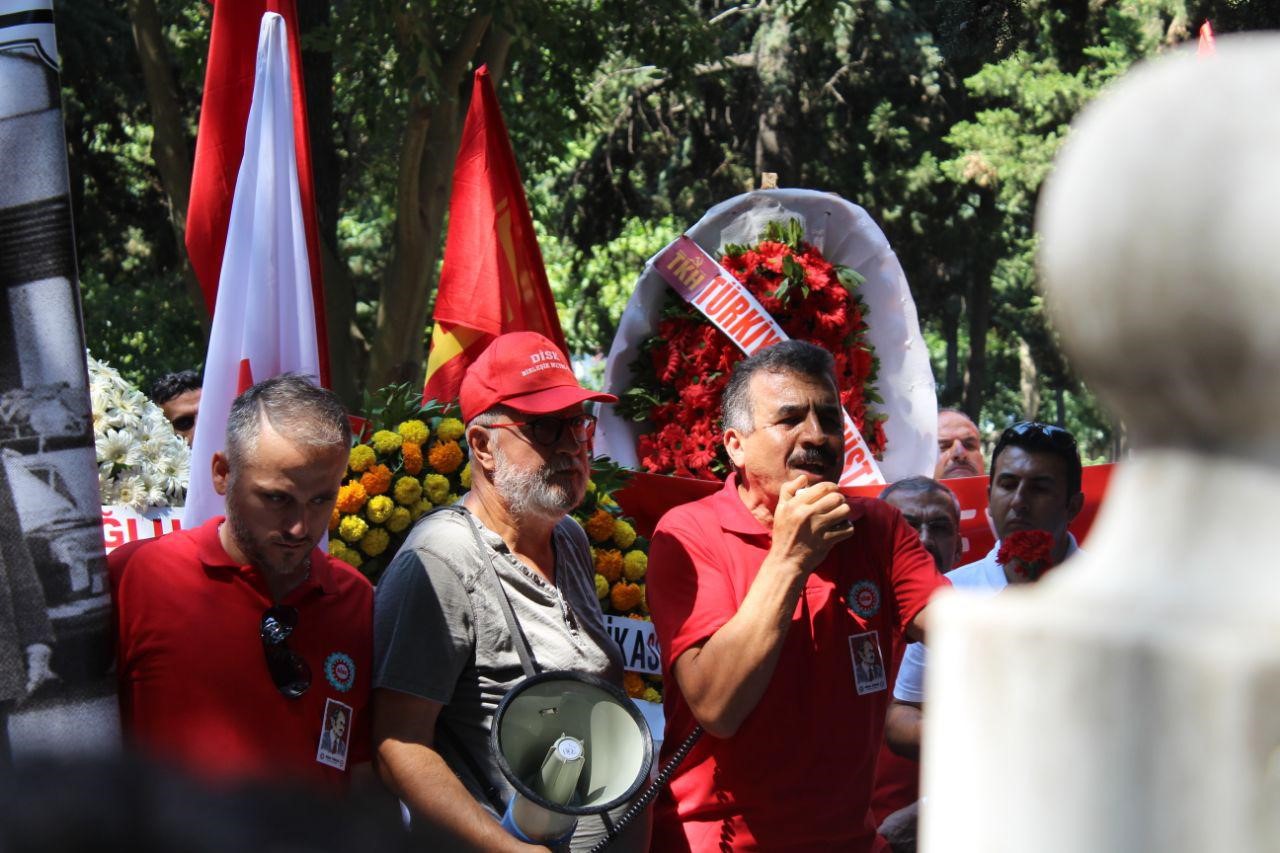 "We are experiencing a similar regime in 1980. It is even more violent one compared to the regime in 1980. Today, they are trying to blow out the torch lighted by Kemal Türkler. Yet, we will not give up class and mass unionism", he continued.

Reminding that the Turkish government suppresses collective labor agreements and bans all workers’ strikes, Serdaroğlu also said, "We do not recognize these bans. Metalworkers relentlessly continue their struggles. We do not lose our hope but we grow it."

"…Freedom will walk around swinging its arms;

Freedom in its most glorious garment: worker's overalls

In this beautiful country of ours."

After Serdaroğlu, the DİSK President Arzu Çerkezoğlu said: "We need to accelerate the flow of time against the darkness in which the country is being tried to be pulled in. History calls the working class for the duty in these days when all the rights of the working class have been usurped."

The remembrance ceremony for the revolutionary union leader ended with the slogans of "Long Live Revolution and Socialism!"

On July 21, the Communist Party of Turkey (TKP) had released a statement regarding the 39th anniversary of Kemal Türkler’s murder and called on people to attend the remembrance ceremony held for the commemoration of the Turkish revolutionary syndicalist at Topkapı Cemetery.

In its statement, TKP noted that "We commemorate the labor leader, unionist, DİSK President Kemal Türkler with respect in the 39th anniversary of his murder."

Stating that Türkler was murdered by fascist hitmen armed by the capitalist class and imperialists, TKP said: "The killing of Kemal Türkler had been planned as an attack against the organization of Turkey’s working class. A few months later, the military coup of September 12 confirmed this fact."

TKP’s statement also reminded that Ünal Osmanağaoğlu, the fascist gunman and suspected killer of ex-leader of DİSK, identified by Türkler’s daughter, has been acquitted on ‘limitation of action’ by the Turkish courts.

Osmanağaoğlu had avoided a punishment as he left the country and resided in Australia by using his brother’s ID. It was revealed that during his time abroad, Osmanağaoğlu was found guilty of selling drugs and jailed for 3 years. Then he was deported to Turkey in 1992 and lived in the country without any criminal sanction by the Turkish government for almost 10 years.

19 years after the murder, Osmanağaoğlu was spotted in Kuşadası, Turkey’s western province of İzmir. He was running a facility of the Ministry of Forestry.

After he was caught and the case was opened once again on his arrest in 1999, Osmanağaoğlu was sentenced with 7-times capital punishment for only the killing of 7 young revolutionaries from the Workers’ Party of Turkey (TİP). Yet, Osmanağaoğlu was released with the 3rd Judicial Reform Package enacted by the ruling Justice and Development Party (AKP) in 2012 after he did 13 years in prison.

Moreover, Tamer Osmanağaoğlu, the brother of Ünal Osmanağaoğlu, who had helped him to flee abroad using his identity card after the murder of Kemal Türkler, was elected as a deputy from the fascist Nationalist Movement Party (MHP) in the June 24 Elections in 2018.

"These are murderers for hire. Yet, it is this corrupted bourgeois order that creates them", TKP said in its statement and added: "Capitalists’ ambition to make more profit has targeted many intellectuals, labor union leaders and revolutionaries. Murders and massacres are for the continuation of the system of exploitation."

"This social order will change. No crime will go unpunished. The working class will have a score to settle with both the murderers and the exploiters."

"We are once again saluting Kemal Türkler with respect…" TKP concluded its statement.