Turkey's resisting miners to governor: We are not afraid, we will march!

The governorate in Turkey's western province of Manisa passed a new ban to prevent the miners from marching to Ankara. "We are not afraid, we will go on marching," the resisting workers say. 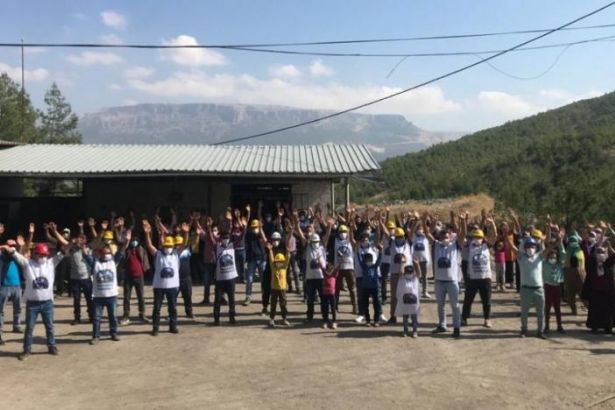 The Governorship of Manisa took a new ban decision to prevent miners, who could not get their compensation payments from Soma Uyar Mining company, from marching to Ankara. Accordingly, "chain walking" in Manisa was also prohibited until November 4.

Miners were going to march on Octrober 12 to protest their unpaid compensation payments and wages, but then the governorship decided to ban action in the province and after this ban, a new ban decision followed.

With the decision taken by the Governorship of Manisa on October 20, “All kinds of meetings and demonstrations, hunger strikes, group protests, making chains and chain walking, laying wreaths, opening stands, tents and commemorative meetings and such actions and activities were interdicted in the province between October 21 and November 4".

"IS THAT SO GOVERNOR? WE'RE NOT AFRAID!"

Independent Miners' Union, reminding that in the first meeting with the Governorship of Manisa, the workers were told they could wait until the end of the ban on October 20 and then walk on, but with the new ban, it turned out that this is not true.

"The Governorship looked at our action, when they noticed 10 citizens walking side by side for example, called it a chain walk and prohibited it,” said the statement made by the Mine Workers' Union.

Independent Miners' Union responded to the governor's decision by saying "We are not afraid, we will march!" In a statement made on the Twitter account of the union, it said; “It is forbidden to chain walk, is that so Mr. Governor! WE DO NOT FEAR! Unless a concrete solution ground is formed, we will repudiate this prohibition, which only serves to usurp the rights of 748 miners and to safeguard the boss. WE WILL MARCH !!!"