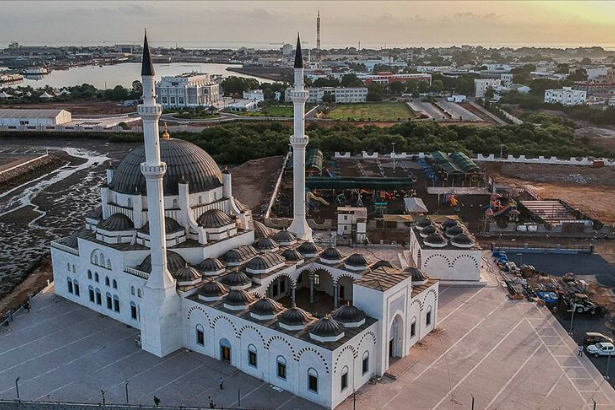 Turkey’s Diyanet Foundation started to construct a mosque and a social complex in Djibouti following President Recep Tayyip Erdoğan’s visit to the African country in 2015. The mosque is named after Abdulhamid II, one of the last sultans of the Ottoman Empire.

As the official inauguration ceremony of the mosque is expected to take place in the end of November, the big mosque has the capacity of 6 thousand of prayers. The Turkish parliamentary speaker is also reported to participate in the opening ceremony.

During Erdoğan’s visit to Djibouti in 2015, the African President Ismail Omar Guelleh is reported to have said that he wanted to see an Ottoman-style mosque and hear the sounds of the Islamic call to prayer in his country.

Mehmet Savaş Polat, the general director of the Diyanet Foundation, said that this mosque will be the first mosque in Africa, which is constructed in the name of an Ottoman sultan after the end of the empire.

“As the biggest mosque in Djibouti, the Mosque and Complex of Abdulhamid II will contribute to the increasing religious, historic and cultural fraternal relations between the peoples of Anatolia and Africa. It will also be the symbol of unity and peace,” Polat said.

One of the major driving forces of the AKP government’s Islamist anti-secular policies in Turkey, Diyanet, an official state institution, is heavily criticized for having very large budgets and expenditures as the working people of the country are forced to live in severe conditions amidst the ongoing economic crisis.

As Diyanet’s budget allocation was 1.2 billion lira (around $208 million) in 2018, the religious presidency sparks outrage for also such big “investments” as part of the Islamist AKP government’s show-off projects in and out of the country.