“We will not allow any threat from Manbij and the east of Euphrates. These areas should be controlled by Turkey,” the Presidential Spokesperson İbrahim Kalın said after the cabinet meeting on Monday 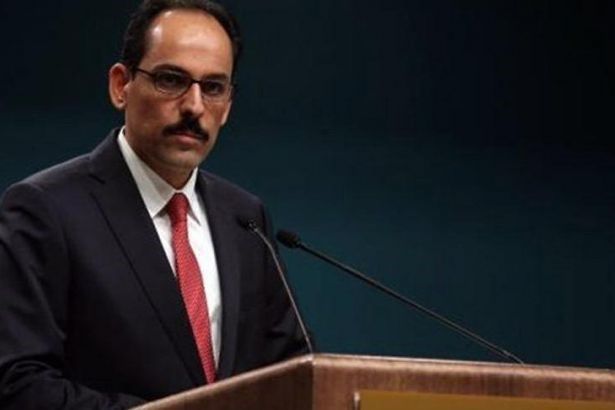 Turkish Presidential Spokesperson İbrahim Kalın made statements after the cabinet meeting on Feb. 4, giving information regarding “the safe zone” plans in northern Syria with the Trump administration.

Stating that the Turkish government continues to keep in touch with its partners in Syria, Kalın said, “Turkey should exercise control over Manbij and the east of the River Euphrates. We will never allow any threats from this region again. I want to emphasize our determination in this issue.”

Noting that the news in the press about the agreement reached between Turkey and the United States over the safe zone does not reflect the reality, Turkish Presidential Spokesperson stated: “The negotiations are still proceeding. The 32-kilometer safe zone planned by the U.S. President Donald Trump aims to protect Turkey, Turkish-Syrian border, and the Syrians living in that region.”

“Until the U.S. gave the military support to the Kurdish People’s Protection Units (YPG) and Democratic Union Party (PYD) during the Obama administration, there was no organization in Syria that has such a power. So there would be no such terrorist organization when the American support is withdrawn from the region,” Kalın said.

ERDOĞAN SUPPORTS THE CREATION OF A ‘SAFE ZONE’

In January 2019, the Turkish President Recep Tayyip Erdoğan had supported the U.S. plans for the creation of a safe zone in Syria, saying that “Especially we [Turkish government] can get involved in this issue with our Housing Development Administration of Turkey (TOKİ). Yet, if the coalition forces give us financial support, we can build a living space in the safe zone to protect people living there. This move would also prevent migration”’

However, in early February, the Turkish President said in a parliamentary meeting that he has not yet seen an acceptable plan proposed by Donald Trump for the creation of a safe zone in northeastern Syria.

Trump’s decision to withdraw from Syria came as Ankara made preparations for a military operation against the U.S-backed Kurdish YPG militants in the northern Syrian town of Manbij under control of the Kurdish forces. Turkey, on the other hand, does not want YPG to be involved in safe zone plans.

Meanwhile, Kurdish-led Syrian Democratic Forces (SDF) has said it was ready to support the creation of a safe zone in the Syrian-Turkish border, warning that such a zone must have international guarantees that would prevent foreign intervention.

“We hope to reach agreements and solutions to ensure the stability in the Syrian-Turkish border region,” the SDF authorities stated.

As SDF claimed support for the U.S-led creation of a safe zone in the region, the PYD had announced in January that the Syrian Kurds would reject a safe zone plan in case it is planned under the control of Turkey in northern Syria.

The PYD authorities also underlined that the Kurds would only accept the deployment of the United Nations (UN) forces in the safe zone to be established to prevent a potential offensive by the Turkish forces.