The Peace Committee of Turkey released a statement ahead of the NATO summit in London. The Committee calls for the abolishment of NATO and Turkey’s withdrawal from the alliance 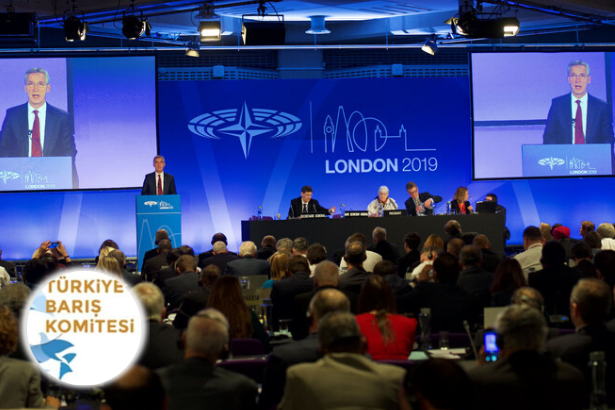 The Peace Committee of Turkey issued a statement before the NATO Summit to be held in London, recalling the history of NATO. Noting that at the summit, the Committee is planning to take new decisions on NATO's intervention areas and forms, the peace committee stated that a real anti-imperialist policy first requires to leave NATO.

The presidents or leaders of the NATO member states are meeting in a summit held in London during the 70th anniversary of the alliance. NATO has been the most important war organization of imperialism for these 70 years despite some contradictions and disputes between the members.

Having been established as an instrument of capitalism against the socialist system led by the Soviet Union, NATO has continued to fulfill its extremely important functions, contrary to some allegations, in the name of imperialism since the Soviet Union ceased to exist. The interventions of imperialism in Eastern Europe and the Middle East were carried out through NATO. Such countries as Yugoslavia, Afghanistan, and Libya became the targets of this bloody war organization as tens of thousands of innocent people lost their lives.

As millions of people are struggling with starvation and poverty in today’s world, the military expenditure of the member states of the organization has increased to the level of $1 trillion while the organization is still enlarging.

In the summit in London, new decisions will be taken on NATO’s fields and forms of intervention. Eastern Europe and Asia-Pacific will remain the regions that they will continue to focus on.

One of the considerable agenda items will be about the organization’s new steps with regards to space, cyberspace, and artificial intelligence. Space will be defined as a battlefield.

On the other side, Turkey has been attempting to form a foreign policy by means of intra-contradictions of imperialism for some time, and NATO is an important field of these attempts. However, what has taken place so far clearly reveals that this policy is insincere and it is not anti-imperialist at all. A true anti-imperialist policy firstly requires withdrawal from NATO.

In order to reach peace:

* NATO must be dissolved.

* The increase in military expenditures must be terminated.

* Nuclear armament must be stopped immediately, and the existing nuclear weapons must be eliminated.

* The foreign policy practices disregarding the sovereignty of states must come to an end.

* The foreign bases in all countries must be shut down.