The students of Middle East Technical University, one of the top Turkish universities, protested the police attack on LGBTI+ pride parade and the university management's policies allowing the police forces on campus 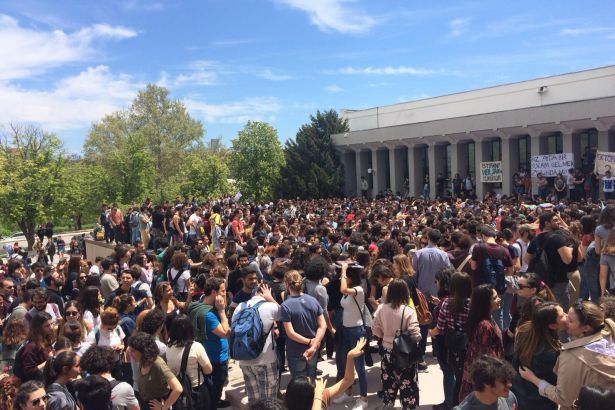 After the police attack on LGBTI+ pride parade at Middle East Technical University (METU) in Ankara and a large number of students were detained on May 10, METU students called for a boycott on Monday, May 13, to protest the attack and the university management.

The students organized a 'farewell ceremony for the university's president' in front of the president's office on campus. They also invited all METU components to be part of the boycott to take place on Tuesday in order to protect the university's progressive tradition, the country, and the future.

On Tuesday, May 14, with the slogan "If there are police, violence, and hate, there will be no classes", METU students organized a boycott by not attending the classes throughout the day and stopping the usual life on campus.

Students from different faculties joined the boycott, began to gather in front of their buildings and walked to the building of the president's office.

Academic and administrative staff also joined the students’ gathering in front of the president’s office and read their statements supporting the students.

The students announced their five important demands from the university management. Metu students demanded the police forces not to be allowed on campus, the student clubs and student events not to be prevented, and the president to resign.

The University Participants Association released a statement, condemning the attack on the Pride Parade. In the statement, the associations stated that there is a legitimacy problem for the university management and this is the heaviest burden that cannot be carried socially. Demanding the university president, Verşan Kök's resignation, the association called on all the science workers to organize for a METU that defends science, labor, and enlightenment.