Police attacked the metalworkers who were marching to Ankara to protest the layoffs after they organized under a trade union. 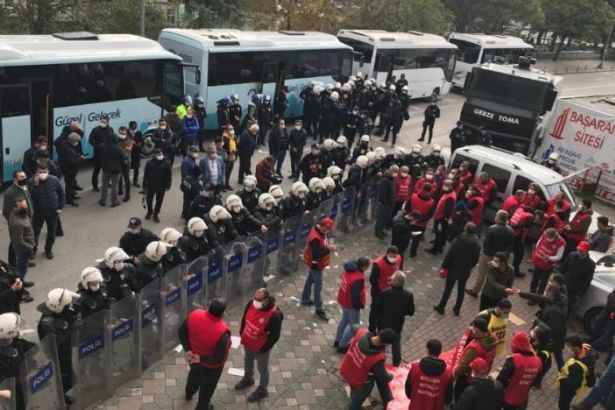 Police forcibly broke up the United Metalworkers’ Union’s march from Turkey’s Gebze to the building of the International Labour Organization (ILO) in Ankara, after workers being dismissed without any compensation for being trade union members.

“What is the disgraceful crime that workers committed?” the chair of United Metalworkers’ Union, Adnan Serdaroğlu, reacted to the police blockade before the march. “Becoming a trade union member, by unionizing, people in this country are committing a disgraceful crime.”

After the workers did not back off from their decision, police attacked the march and detained 109 people, including workers and unionists. Following the police intervention, United Metalworkers’ Union made a statement, saying that “We will not let workers who seek their rights to be precluded. The detained workers and unionists must be released. Workers’ demands, not bosses' demands, must be taken into consideration.”

The workers were released after hours of detention.

After the police attack, Greece's All Workers Militant Front (PAME) supported Turkey's metalworkers, sending a solidarity message. “We are in solidarity with the workers who struggle for their rights! Release the detained workers! We condemn the police violence!”, PAME said.

Communist Party of Turkey (TKP) also condemned the attack against the march of metalworkers and released a statement.

The march of metalworkers from Gebze to Ankara, who were dismissed and forced to take unpaid leave because of unionizing, was prevented by the police attack. After the attack, many workers and executives of the United Metalworkers’ Union were taken into custody.

Workers who have to work in danger and in harsh conditions were punished not just by bosses but also by the government.

The bosses, who force workers to work without taking any precautions against the pandemic and dismissing workers or forcing them to take unpaid leave for unionizing, are the guilty ones. Likewise, AKP continues to commit crimes by not taking any real measures to prevent the spread of the pandemic and does not have any priority except profits of the bosses.

Communist Party of Turkey stands with the metalworkers.

Detained workers and unionists must be immediately released. Workers’ march must be allowed.