Following the İzmir Bar Association, lawyers affiliated with the İstanbul Bar Association announced that they will not recognize the decision to postpone the elections. “We announce that we will be at Haliç Congress Center on October 10-11,” lawyers said. 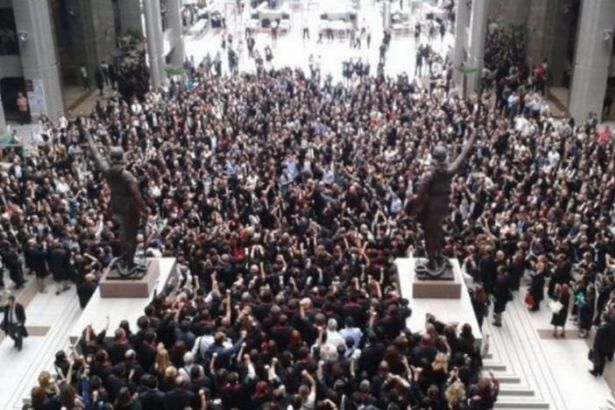 In the previous days, Turkey’s Osmangazi 1st District Election Board, with the circular on "Coronavirus Supplementary Measures" published by the Ministry of Internal Affairs, asked the Board for its opinion on whether party congresses and bar elections will be held, reminding that the activities to be organized by non-governmental organizations, professional organizations with public institutions and their supreme organizations, unions and cooperatives are postponed until December 1.

Turkey's Supreme Election Council (YSK) decided that if district/provincial public health boards should take such a decision, general assembly meetings of bar associations and bar elections cannot be held, while it is not objectionable that political parties hold their conventions.

Following the İzmir Bar Association, lawyers affiliated with the İstanbul Bar also announced that they will not recognize the decision of the Ministry of Interior to postpone the bar elections. Part of the statement of the lawyers is as follows:

“It is clear that the only reason for this postponement of the general assemblies of the bar associations is to give time to the establishment of the bar associations that support the government as an intervention to the independence of the bars and to intervene in the general assembly of the Turkish Bar Association (TBB). It was not surprising that the head of TBB lawyers' association Metin Feyzioğlu’s statement, who stood against the struggle of Bar presidents and lawyers, to support this practice that he hoped would prolong his term of presidency and perhaps lead to his re-election.

However, according to the PROVISIONAL ARTICLE 23 which was added to the Attorney’s Act with the law of multiple bars that the Constitutional Court rejected the application of unconstitutionality under the threats of the political power, ‘In all bars, the elections of bar presidency regardless of their term of office, management, discipline and supervisory board memberships and Turkey Bar Association delegations are held in the first week of October 2020.’

The statements of the current administration of the İstanbul Bar Association that accept this unlawful intervention conflict with the legal defense duties of the Bar Associations. In accordance with the authority and duty given by the Attorney’s Act, the administration of the bar association must be present at İstanbul’s Haliç Congress Centre on the day of the congress and fulfil its duties for the general assembly to take place and stand beside their associates without allowing any unlawfulness.

We, as the signees consisted of Bar election groups and legal institutions, will not stand by the prevention of the İstanbul Bar Association's general assembly by illegal methods, political operations against the Bar Associations, the usurpation of our rights to be a candidate for Bar organs, to elect and to be elected.

We announce that we will be at the Haliç Congress Center on October 10-11, the scheduled second meeting day of the General Assembly, and invite all our associates, who are members of the İstanbul Bar Association, to participate in the General Assembly in order to defend the independence of the Bar Associations and our rights to vote and be elected.”