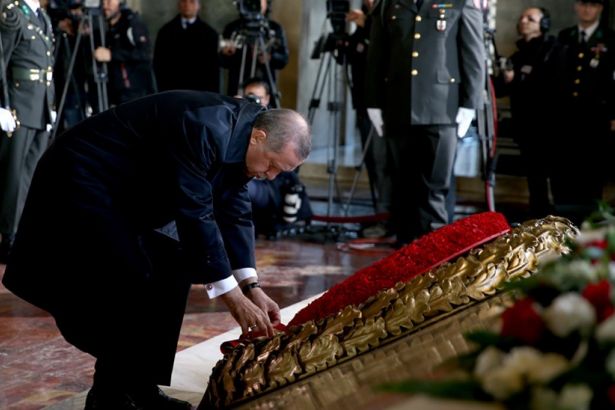 President Erdoğan visited Anıtkabir, the mausoleum of Atatürk, during a ceremony marking the 94th anniversary of Republic Day on Oct. 29, 2017, in Ankara. Erdoğan, who is known with his previous covert criticisms and defamations over Atatürk, has recently resorted to complimentary words regarding the founder of Turkey; furthermore, he addressed as "Dear beloved Atatürk," whilst writing his note on the official Anıtkabir memorial book.

Erdoğan often avoids saying Atatürk, which means "ancestor/father of Turks". He describes Atatürk as "Gazi (warrior) Mustafa Kemal". Erdoğan views himself as the father of a "new Turkish identity", one aligned more closely with its Ottoman past.

Following Erdoğan's "complimentary" words towards Atatürk, some pro-government journalists wrote newspaper articles in line with Erdoğan, which is why a debate has sparked in the country whether Erdoğan’s AKP party administration instructed pro-AKP journalists to pen articles praising Atatürk.

"There is nothing like the Kemalist tutelage system, but a pro-NATO/global tutelage system rapidly formed after Turkey’s entrance to NATO in 1952, which had no link with Atatürk," journalist Ardan Zentürk noted. Stating that "Mustafa Kemal did not collaborate the British forces" in an attempt to invert the Islamists' classic arguments, Zentürk also added that there is no need to challenge to secularism. Zentürk said if Atatürk had established an anti-religious republic, Erdoğan-like politicians could not have aroused in Turkey.

Nagehan Alçı also penned an article "Loving Atatürk" and said: "October 29 is celebrated enthusiastically every year, however, as far as I can see, many things have changed after July 15 [coup attempt in 2016]. No matter how different we are, the threat towards all of us united us in common values at that night. Mustafa Kemal Atatürk and the Republic are of those leading values."

Alçı echoed Erdoğan’s recent words at Atatürk mausoleum, "The resistance which passed into history as the July 15 epic is the embodiment of this spirit and will,” adding that "Loving Atatürk does not stand for sacralising him."

Yet another 'Atatürk' article by Mahmut Övür, a pro-AKP journalist from daily Sabah, has given hints why President Erdoğan and his AKP party have recently talked "well" of Mustafa Kemal Atatürk.

Övür's article, "Atatürk and social consensus", noted, "President Erdoğan gave two important messages after he retook the chair of AKP party. The first one was about the new political system, ‘We need to embrace the whole society in order to take 50 percent plus 1 [of the votes]' ", with regard to the presidential election that is scheduled to be held in 2019.

Referring to President Erdoğan's recent message of Republican Day, Övür continued: "It is clear that this approach has generated a positive impact on the sociology that identifies itself with Republican values. … President Erdoğan is searching for a path of a new social synthesis with his new political discourse."

Despite his rejections, then-Prime Minister Erdoğan himself said in May 2013, "Given that a law made by two drunken [people] is respected, why should a law that is commanded by religion be ejected by your side?", referring to the modern founders of the Republic of Turkey, Mustafa Kemal Atatürk and his successor İsmet İnönü. Despite countrywide harsh outcries against Erdoğan’s words on Republican images and values, Erdoğan and his AKP party have continued to use an anti-Atatürk discourse until recent days.

Erdoğan has had to change his policy of alliance, particularly after the abortive July 15 coup, orchestrated by some masterminding groups including the U.S.-based preacher Fethullah Gülen’s network, a long time Islamist ally of Erdoğan’s party, which played a big role in undermining the republican values.