The unlawful trial began on June 24, 2019, where the Turkish government accuses 16 people of ‘organizing and financing the Gezi protests to overthrow the government’ 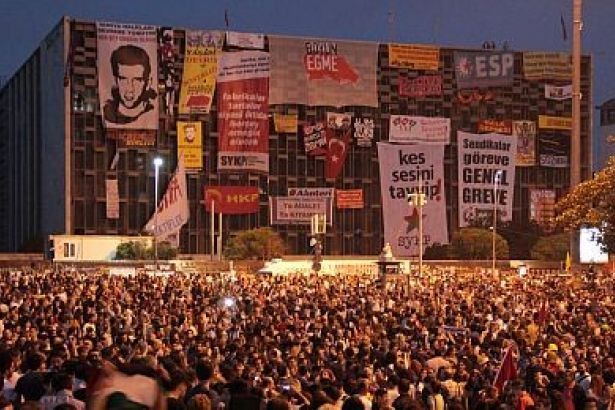 16 people accused of organizing and financing the nation-wide Gezi protests (June Resistance) to overthrow the government in 2013 went to trial on Monday and Tuesday, June 24-25.

Announcing its interim decision, the court ruled that Yiğit Aksakoğlu shall be released on probation with an international travel ban and Soros-linked Osman Kavala remains in detention. The next hearing will be held on July 18, 2019.

Saying that what the Prosecutor’s Office preparing the Gezi indictment understands from ‘the Constitutional order’ is only the Article 8’, Lawyer Can Atalay, who pleaded to the indictment on the second day of the first hearing of the trial, stated that "The indictment has a method problem; it is a ragbag, and it is against the law".

"Political power tried to defame the Gezi protests with the Fethullah Terror Organization [FETÖ] that it could not cope with", Atalay continued.

FETÖ, led by the U.S-based Islamic preacher Fethullah Gülen, is also blamed with being the prime-suspect of the failed coup on June 15, 2016 in Turkey by the Turkish government.

"This indictment is an attempt to smear the most honorable struggle in the history of Turkey. The indictment does not mention freedom of expression, the right to assembly and demonstration, and the protection of the environment", the lawyer said in his plea.

"Gezi is against imperialism. It cannot be explained with any tricks of foreign powers or conspiracies. Opposite views to this is a continuation of not understanding, being unable to understand or pretending not to understand Gezi from the beginning," he added.

Underlining that the Gezi is the will of the people to decide their own fate into their own hands and the possibility of this country to rise up from the darkness, Atalay noted, "Gezi is the country’s hope for equality, freedom and justice."

"Even if there is no demand from Taksim Solidarity, the slogans demanding the government’s resign, which were expressed spontaneously during the Gezi resistance are legitimate", he also stated in his plea.

Taksim Solidarity, which was constituted in 2012 against the rent-seeking projects of the ruling Justice and Development Party in Istanbul’s Taksim Square and Gezi Park, is a coalition comprised of 124 trade unions, political parties, community groups, sports club fan groups, and initiatives embracing diversity and expressing demands in a peaceful, democratic way.

The indictment against the 16 defendants, who are accused of attempting to topple the government, organizing and financing the protests upon the Turkish Penal Code Article 312/2, calls for life imprisonment without parole.

In the 657-page indictment prepared by the Istanbul Prosecutor’s Office, there are 746 plaintiffs and 16 defendants, including Soros-linked businessman Osman Kavala, journalist Can Dündar, actor Mehmet Ali Alabora,  and activist Ayşe Mücella Yapıcı.

Turkish President Recep Tayyip Erdoğan labels Gezi protesters along those accused of carrying out the failed coup in 2016 as terrorists.