A social media campaign has started in Turkey and around the world, with a video showing the resistance of workers, from French Yves Rocher-related Turkish cosmetics company Flormar, who were fired for getting organized around a trade union 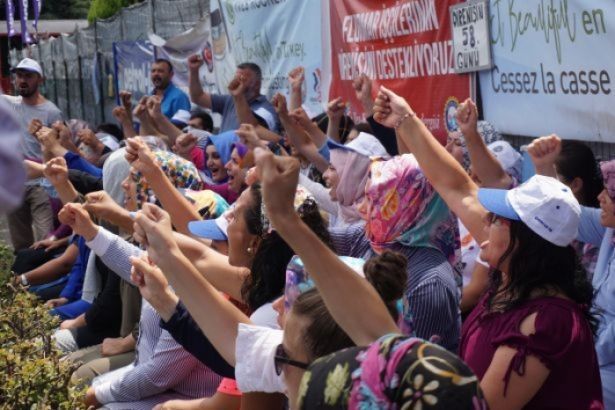 The resistance of workers from Turkish cosmetics company Flormar continues as the workers were fired for several “reasons”, particularly for getting organized around a trade union to protect and increase their rights.

soL HD has shot a documentary video, “Beauty is resisting”, with English and French subtitles, dedicated to the struggle of resisting workers who have worked for Flormar company in the Turkish industrial district of Gebze, near İstanbul. Yves Rocher, a French cosmetics monopoly, has 51 per cent stake of Turkish beauty products company Flormar.

As the workers, mostly female, have been striking for 72 days, demonstrations were witnessed in front of Yves Rocher stores around the world, particularly in France, in solidarity with the resisting Flormar workers in Turkey.

After the unionization started off in Flormar, 12 workers were fired at first in March due to “low performance” and this number soon reached 25. On May 14-15, those who shared their support from inside the factory to the fired co-workers who were making a demonstration in front of the factory were also fired en masse, reaching up to 127 workers in total.

soL News visited the workers at their workplace on July 19 with a video, “Beauty is resisting”, showing the workers narrating their own stories, their experiences and resistance at the factory. The video shows daily resistance practices of the workers as they tell how and why they launched the resistance and the impact of struggle in their daily life.

As the video shows, the Flormar workers, who started to get organized in a trade union (Petrol-İş) around January 2018, they were fired one by one, including many of them who had worked for the company day and night for 14 years, since they were seeking for their labour rights.

Social media users from Turkey and around the globe have started to share soL News’ video with English and French subtitles to show their solidarity with the resisting workers.

As the video sharing has turned into a mass social media campaign on July 26, the Flormar workers and those who support them have popularized the video with hashtags such as #ActBeautiful (in Flormar-in Turkey) and #STOPUnionBusting. Social media users criticize French Yves Rocher and its Turkish trademark Flormar for their anti-labour and anti-trade union practices imposed upon the workers.