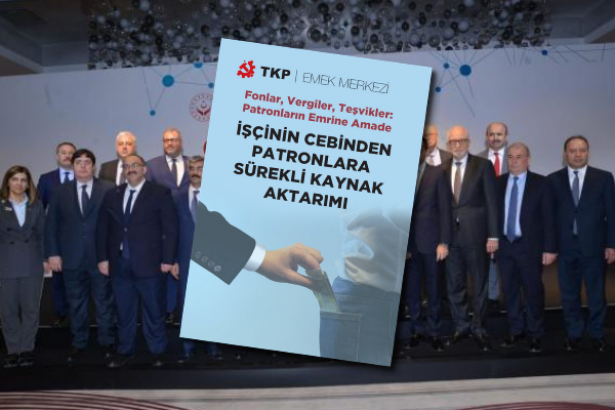 The Turkish Confederation of Employer Associations (TİSK) released a statement on April 29, declaring support to the government’s economic “reform” package that aims to attack the workers’ severance pays and some other occupational rights.

“Considering that they serve for the common purpose, the readjustment of unemployment insurance, employment security and severance pays, which have been conducted independently from each other, will help decrease the employers’ expenses to a fair level, increase the employment, and thus lead the competitive enterprises to further contribute to the country’s economy,” the employers’ confederation said.

The Labor Center of the Communist Party of Turkey (TKP) responded to the employers’ confederation’s supportive announcement to the Justice and Development Party (AKP) government’s recent anti-labor economic “reform” package.

The Labor Center said that the government is always ready to fulfill the instructions of capitalists to usurp the workers’ rights as the government has been working on some new projects and readjustments in order to use such funds as severance pays and unemployment, which were formed with the cuts from workers’ wages, in favor of the capitalist class.

“The bosses are not only contended with laying the price of the crisis on the workers, they also attempt to usurp the workers’ major rights by taking the advantage of opportunity,” the Labor Center noted, underlining that the capitalists seek for a new regulation through which they will minimize their expenses in defiance of the working people as the workers’ wages will be targeted even for the payment of their compensations for cost-free dismissals amidst the ongoing economic crisis.

"The package is the latest manifestation of the AKP government’s loyalty to the capital and the dominant, parasitic class of the country, without any commitments to democracy and law," the communist party previously noted.