The local election board in Turkey's eastern province of Dersim, where the Communist Party of Turkey (TKP) won the local poll, rejected to provide the certificate of election for Fatih Mehmet Maçoğlu, the elected mayor of the city. The communist party reacted with a statement 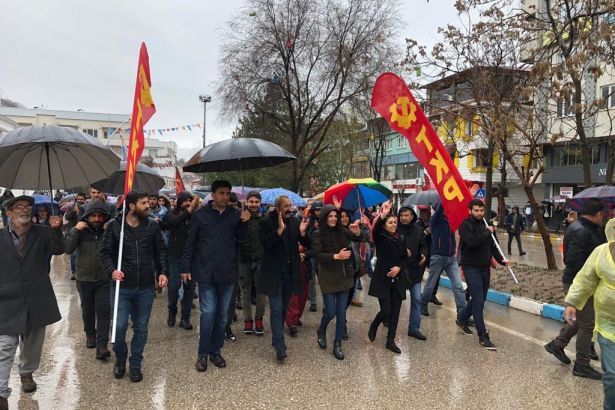 Following the countrywide local elections of March 31, Maçoğlu would take the office today with an official certificate that was to be provided by the provincial electoral board after his electoral success in the city. However, the local electoral authorities delayed the delivery of the certificate on April 4 without showing any proper justification.

As Maçoğlu and his fellow councilors asked about the reason for the delay, the board announced that they would not provide the certificate of election "due to unexplainable security concerns". Then the communist mayor and his supporters made a press statement in front of the municipal building in the city to protest the unlawful practice.

Upon the unlawful steps taken by the electoral board in Dersim, the Communist Party of Turkey released a statement, accusing the board of committing a constitutional crime for delaying the legal process without any proper reason.

Reminding that Maçoğlu, the communist party's candidate, was elected at the local election of March 31 with a clear result, the TKP underlined that the provincial election board in Dersim resorted to a completely unlawful move and did not deliver the certificate of election.

"This arbitrary practice means the violation of the right to elect and be elected that is under the constitutional assurance," the statement noted, calling on the election board to immediately put an end to this unlawful practice and to provide elected mayor Maçoğlu with the certificate of election.

The previous mayor of Ovacık, a TKP-led district in Dersim province, Maçoğlu has become famous around Turkey for his cooperative agricultural model, and fiscal transparency within the municipality. As Maçoğlu won the recent local polls in Dersim by 32.37 percent, Dersim has historically become Turkey's first city to be governed by the communists.

Following the countrywide reaction and criticism against the election board's unlawful decisions, the board is reported to provide Maçoğlu with the certificate on Friday, April 5.