Communist Women of Turkey saluted Cuba with a letter for Cuba's contribution to the emancipation of women on the occasion of the International Day for the Elimination of Violence against Women. 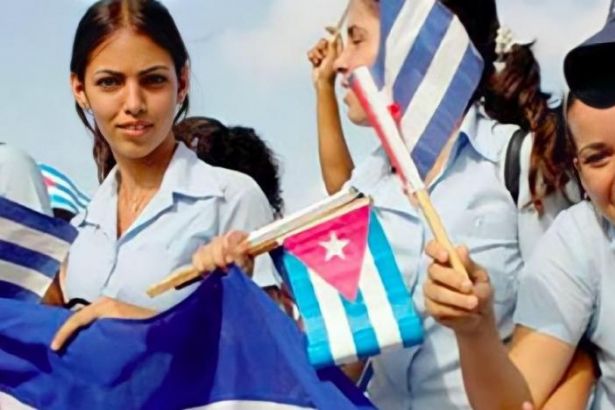 The Communist Women from the Communist Party of Turkey (TKP) sent a letter to the Cuban Embassy in Turkey on the occassion of November 25, the International Day for the Elimination of Violence against Women.

The Communist Women saluted the Cuban Revolution and Cuban women for their great contribution to the struggle for socialism and emancipation of the women around the world.

The full letter is as follows:

We are proudly saluting your great struggle for the emancipation of women on the occasion of 25th of November, the International Day for the Elimination of Violence against Women.

The revolution has created fundamental changes for Cuban women who were forced to live in poverty and illiteracy, and oppressed for years. Cuban women, who participated in every sphere of life in an organized manner, took an important mission to transform the society after the revolution.

Today, when we think about Cuba, Cuban women come to our minds as they have already stayed out of their homes, as they left the most developed capitalist countries behind on the struggle for equality in social, political and cultural areas of the society.

Cuban women, who inspire us with their self-confidence and gleam in their eyes along with their successes in science and arts, are eliminating and burying the violence and oppression against women in the dustbin of history, which is the bleeding wound of capitalism.

On the other hand, the violence against women in Turkey oppresses Turkish women every day more than before. The pandemic revealed the truth that the women are always fired from their jobs in the first place during the pandemic, who are always forced to work for lower wages without insurance as not only do they carry the burden of the household labor but also of the children’s education.

With the pandemic, a significant retreat is being observed on the schooling rate of female children. Every day, at least one femicide is happening and women are facing every kind of violence in their homes, on the street, and at their workplaces.

In this dark situation; we, the communist women, see the most necessary thing when we look at Cuba: hope and determination. As an inseparable part of the revolution, the struggle of Cuban women to protect and maintain the revolution reveals our path of struggle. We are commemorating the great revolutionary Fidel Castro who we lost four years ago today while we are strengthening our struggle in solidarity against the violence against the women.

We would like you to know that Fidel, who always pointed to the better and advanced, is not only an inspiration to the Cuban women, but also to the Turkish women who struggle for emancipation in Turkey.

Fidel and the continuous Cuban Revolution prove that the emancipation of the working class and the women is in socialism, and socialism can be realized despite all the irrationality and tyranny of capitalism, despite such arguments and lies that equality and freedom is impossible and struggle has no meaning. Gladfully, Fidel is still alive with millions of Cuban people in Cuba, only where all the children can be happy totally.

Your existence strengthens our struggle for a socialist country where no women will be oppressed and discriminated against, where all kinds of violence and exploitation will be eliminated.

The women of the Communist Party of Turkey