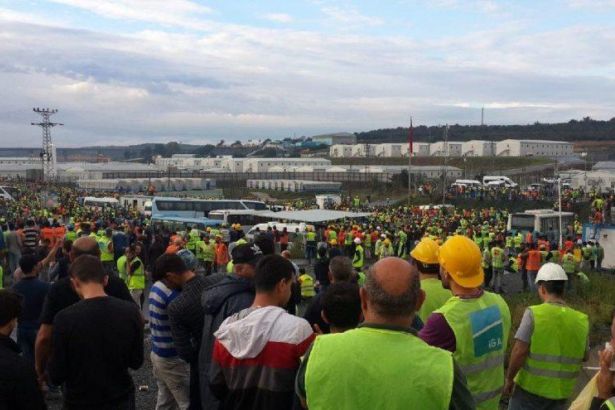 A Turkish court jailed 24 workers ahead of a trial over their actions in protests against labour conditions at Istanbul's giant new airport.

Hundreds of employees from the airport were rounded up at the weekend after protesting and striking over labour violations during the rush to open the airport next month. Workers at the airport have made complaints ranging from violations of labour safety which led to dozens of deaths on the site to a lack of properly-organised transport to take them to and from the new airport.

Most of those detained were released without charge but 43 appeared before a judge at a court in the Istanbul district of Gaziosmanpasa late Tuesday.

Of them, 24 were remanded in custody while 19 were allowed to go free under judicial control after an overnight court session.

The workers were sent to prison after the hearing at Istanbul’s Gaziosmanpaşa Courthouse on Sept. 19 for "damaging public property," "violating laws on assemblies and rallies," "resisting police" and "violating freedom to work."

Some 36,000 people are working at the site as the clock ticks to the official opening on October 29 and a complete shift of flights from Atatürk International Airport which is then to be immediately closed.

The contractors have been forcing workers to work day and night under inhuman conditions to finish the project.

The workers refused to work several times as their salaries were not paid for two months. Tens of thousands of subcontracted workers working under 1500 firms are employed for the third airport project.

Workers have also complained about the poor food at the site, bed bugs in their sleeping quarters and delayed salaries. Pictures they posted online showed cracks in the ceilings and walls of the container homes where they are housed.

The delegation of the Communist Party of Turkey's (TKP) 2018 Conference saluted the concurrent strike of the construction workers of İstanbul's new airport that had just broken out with the participation of TKP members.

TKP completes 2018 Conference with the appeal “To the Workers!”