Turkish government is in a controversial diplomatic situation between the US and Russia over its presence and moves in Syria's Idlib. 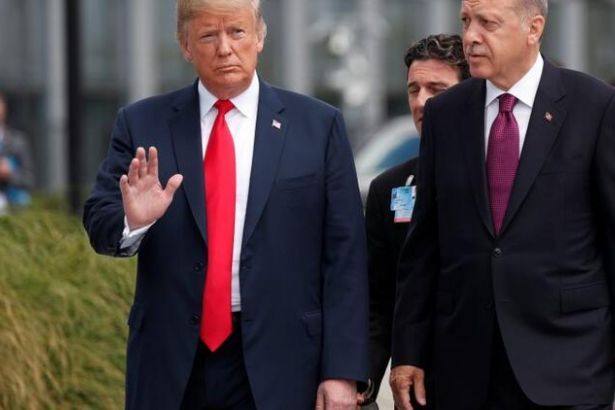 Referring to recent direct clashes between Turkish army and Syrian government forces in Syria’s northern province of Idlib, Deere informed, ‘‘President Trump conveyed the United States’ desire to see an end to Russia’s support for the Assad regime’s atrocities and for a political resolution to the Syrian conflict.’’

‘‘President Trump also reiterated that continued foreign interference in Libya would only serve to worsen the situation,’’ he continued.

Two recent conflicts occurred in February between Syrian Arab Army (SAA) forces and Turkish military units in Idlib, a region invaded by the Turkish Armed Forces (TAF) and Ankara-backed jihadists as a result of a military operation last year.

After its new advances in the region, securing northern city of Aleppo, Syria’s commercial centre before the war, and a strategically important M-5 highway that connects Damascus with Aleppo, SAA announced on Feb 17 that Syrian government forces regained the control of territories in northwestern Syria, declaring that they will continue to remove terrorist groups ‘‘wherever they are.’’

Upon the further advances of the Syrian army in the region, which have cut the supply line of jihadists and effectively driven them out of the area, a military convoy of 150 armoured vehicles to support the Turkish observation points deployed around Idlib, Turkey’s state-run Anadolu Agency reported on Monday.

On Feb. 12, the Russian President Vladimir Putin had a phone conversation with his Turkish counterpart Recep Tayyip Erdogan, discussing the end of the Syrian crisis within the context of escalated tensions between SAA and TAF in the Idlib de-escalation zone.

Ankara and Moscow had decided to hold a series of meetings to ease the tensions in the region with the participation of the Turkish and Russian military delegations, representatives of the Ministry of Internal Affairs, the Ministry of Defense and intelligence of the two countries.

The second round of negotiations between the Russian and Turkish delegations was held in Moscow on Feb. 17.

‘‘Much work remains to be done. We continue to actively cooperate with Russia on these issues. You will find out the final answer on Monday, after the meeting of our delegations in Moscow. We must not allow the Syrian problem to play down our cooperation and affect our relations,’’ Turkish Foreign Minister Mevlut Cavusoglu responded a question regarding possibility of an agreement, like the Sochi Agreement of 2018, in an interview before the meeting.

Turkish Foreign Minister had previously stressed that the attacks in Idlib must stop and it was necessary to establish a lasting ceasefire that would not be violated at the Munich Security Conference after his meeting with Russian Foreign Minister Sergey Lavrov.

Turkish delegation demands to stop the Syrian army’s military operations on Idlib and their withdrawal beyond TAF observations points located in the territories regained by the Syrian government forces. Yet, these demands of the Turkish side, which mean an end to Syria’s war on terrorism, were rejected by Moscow.

‘‘Negotiations will be resumed tomorrow morning,’’ Foreign Ministry of Turkey announced on Monday.

Turkish President Recep Tayyip Erdogan had threatened the Syrian government that Turkey is determined to push SAA forces beyond Turkish observation posts in the northwestern Idlib by the end of February. Turkey has set up 12 observation posts in Idlib, the last jihadist-held stronghold in Syria, as part of the Sochi Agreement, a memorandum on stabilization of the situation in the Idlib de-escalation area, signed in 2018 with Russia, which openly supports Syrian President Bashar al-Assad.

Most of the Turkish observation points in the region have been besieged by the Syrian army following its advances in Idlib.