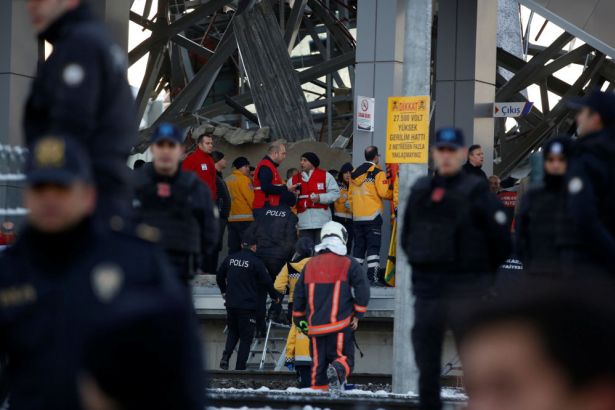 Turkey’s United Trade Union of Transport Employees has indicated to the untimely inauguration of the train line as part of the government’s propaganda in June elections as the real reason of the murderous high-speed train crash in Ankara.

İsmail Özdemir, an administrator from the Turkish transportation trade union, has talked to soL News following the murderous train crash. “The number of the lines was inadequate, there were 3 lines, they said, ‘Let’s increase it to 5’. The line was closed to train operations in July 2016; it was early opened in April 2018 without waiting for the end of a two-year timespan. The reason was the June elections, the inauguration was carried out in a populist manner, he has said.

A Turkish high speed train collided with another locomotive and crashed into an overpass at a train station in the Turkish capital city of Ankara on early Thursday, killing nine people and injuring nearly 90 others.

"WE WARNED BUT THEY TURNED A DEAF EAR"

Özdemir said that the line was put into service although the required signalization works were not terminated properly. Underlining that the lines and train service became chaotic due to incomplete operations, he has said, “As the trade union, we warned them several times, but they turned a deaf ear to us. We have lost our friends and passengers.” He has indicated to populist policies of the government as the real reason of the accident.

In the run up to the presidential and parliamentary elections, the AKP government, led by President Recep Tayyip Erdoğan resorted to several groundbreaking ceremonies as part of their political propaganda.

“There is not any signalization yet in the Sincan-Ankara line. It has been under construction. The engine drivers were talking with each other via radio or mobile phones. This was probably the reason for the accident,” said Yusuf Yener, the chair of Turkey’s Chamber of Mechanical Engineers.

A source from the Turkish State Railways (TCDD) also told soL that a disorder in signalization led to the crash.

As the TCDD defines engine train as “the train operating without passengers on the line as an extra security measure before starting the first commercial train,” the source has told soL that the drivers had to communicate in the absence of signalization.

The Communist Party of Turkey has also made a statement regarding the recent train crash. “People who want to travel fast and safely are killed on the new railway routes that were not constructed with a good planning but constructed with the push of greedy capitalists and Erdoğan’s orders,” the statement has noted. The communist party has said that it will go after the murders and anti-labour policies of the government.