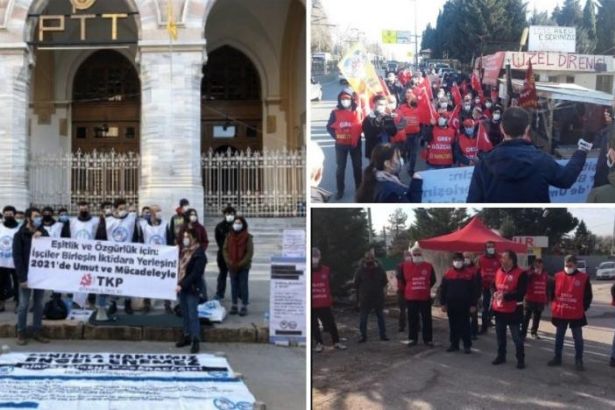 While entering the new year, The Communist Party of Turkey (TKP) paid visits to resisting workers of Uzel Machinery and PTT in İstanbul and Baldur in İzmit. Members of TKP expressed their solidarity with a banner “For equality and freedom: Workers unite, take power”.

The first visit was for the Uzel Machinery workers who have been resisting for 26 months. Selahattin Kural spoke in the name of TKP İstanbul provincial organization, “We salute the resistance of Uzel Machinery workers as we are entering 2021. 2020 was not a good year for the working class. While struggling against the pandemic and earthquakes, workers also faced the opportunism of the bosses. The struggle has grown stronger through solidarity networks and workplace committees. Private school teachers, construction workers, cafe-bar workers, workers from all sectors fought for their rights. These struggles raise our hope. As we enter 2021, in order to overthrow this order that produces inequality, we should organize to establish an equal free country.”

TKP İstanbul provincial organization also visited PTT workers who had been dismissed because of unionization. PTT-Sen (PTT Union) workers have been launching a sit down strike for 17 days for reemployment.

TKP Istanbul Provincial Organization paid a visit to the resistance area in front of PTT Chief Directorate in Istanbul in order to express solidarity with the PTT workers who welcomed 2021 in a struggle. Workers in the resistance reiterated their determination to continue fighting until they get their rights.

TKP paid a visit to Baldur Suspension workers who were resisting in İzmit. Murat Salamcı from TKP Gebze provincial organization stated that workers can win the fight by spreading this struggle to other factories. He underlined that the point is getting rid of this social order producing hunger and poverty.

Speaking for The United Metalworkers' Union (Birleşik Metal-İŞ), Necmettin Aydın said that workers in Baldur are employed with minimum wage, workers suffer limb loss due to lack of occupational safety precautions, organized workers were fired or taken on unpaid leave. He also stated that they will continue to grow this struggle together and organize the union into the factory.