TKP's solidarity visit to resisting mine workers in Turkey's Ermenek

The Communist Party of Turkey's (TKP) Konya provincial organization and solidarity network "We Breathe Down the Bosses' Neck" (PE) visited the miners who have been resisting for 77 days in south central district of Ermenek. 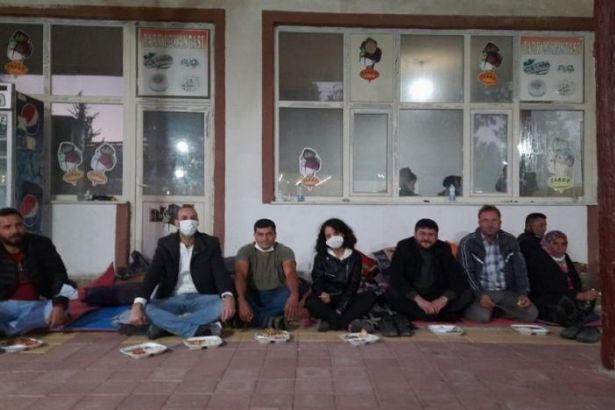 On October 12, hundreds of miners and their families from the districts of Turkey’s Ermenek and Soma tried to march to Ankara to demand their detained wages, compensations and other benefits owed for years. They were blocked and attacked by police and gendarmerie forces. More than 30 miners in Soma were detained on Saturday after having been kept for seven hours.

Workers in Ermenek wanted to read a press release in front of the bosses' house and workplace in Turkey’s Konya on the first day of the resistance and were blocked by the police. The process was followed by the establishment of resistance tents in Güneyyurt/Ermenek with the prevention of the workers’ march towards Ankara.

The Communist Party of Turkey's (TKP) Konya provincial organization and solidarity network "We Breathe Down the Bosses' Neck" (PE) paid a solidarity visit to the resisting workers in the district. Having dinner with the workers in the area where the resistance tents were located, TKP members stated that they saw that the determination of the workers was not affected by the cold of winter and that they would do their best for the people of Konya to understand the workers' righteousness.

Making a press statement there, TKP members reminded that the Soma mine workers rushed to the wreck after the earthquake in İzmir and said, “We have seen once again that the problem of the working class is the problem of the whole country. In the İzmir earthquake, the mine workers in the Soma branch put their troubles aside and the evacuation teams immediately set out, showing an example of solidarity.”

Emphasizing that this resistance of the miners gives hope to the whole country and the future of our country depends on the struggle of the working class, TKP members said that, “There is one thing we want to remind the bosses once again: The whole country saw that when the working class acted together, we removed the articles in the omnibus bill that wodul steal our children’s and our future. The working class is powerful, destroys palaces, overthrows dictators. It is the working class that will put an end to exploitation and reactionism.”

Turkey’s ruling AKP took a step back on the articles that will usurp the severance pay and pension rights of the workers in the omnibus bill which was submitted to the Parliament as a “new employment package.”