Communist Party of Turkey (TKP) calls on its members and friends to meet at 500 points all around Turkey and abroad to welcome its 100th foundation anniversary. 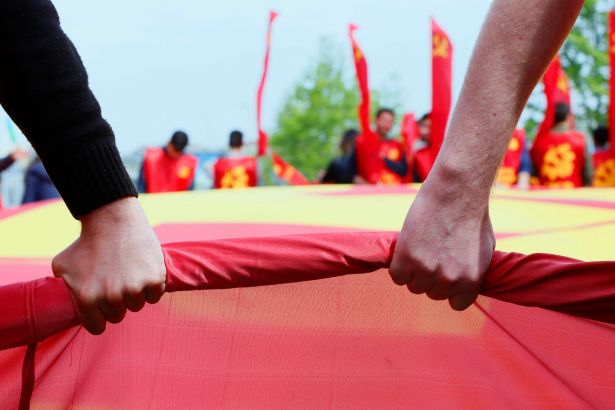 The 100th foundation anniversary meeting of the Communist Party of Turkey (TKP) in Turkey’s İstanbul is banned by the Governorship of İstanbul the other day, the epidemic being used as an excuse, despite the Party took all the necessary precautions. Only a few days earlier, Turkey's President Recep Tayyip Erdoğan visited the flood-hit town in northern Turkey, making a public speech without any measures against the pandemic.

In response to the ban, the Communist Party of Turkey (TKP) made a statement, declaring that “We will welcome our 100th year at 500 points all around Turkey and abroad, sharing our determination with our people.”

Turkey's communists declared that they are determined not to leave this country to anti-people governments and to strengthen the struggle despite blocking attempts. TKP will celebrate its 100th year by meeting with its friends at 500 different points across the country on September 10.

The full declaration against the ban is as follows:

“According to Turkey’s ruling AKP, coronavirus disappeared during the opening of Hagia Sofia as a mosque, then became a threat to Turkey’s Victory Day celebrations. Again, disappearing during Turkey’s President Erdoğan’s rally in flood-hit Giresun, the virus has notified the AKP Government that it will re-appear during the Communist Party of Turkey (TKP)’s 100th-anniversary meeting, and the meeting that will be held in Turkey’s İstanbul was banned by the Governorship of İstanbul.

Contrary to the ruling party, TKP values human health and has protected public health besides the health of its members and friends, taking rational measures in accordance with the data found out by scientific studies from the beginning of the pandemic. Thus, there were neither any problems during the 13th Congress of TKP convened last month with domestic and foreign delegates, nor any participant has had any health problems following the meeting.

TKP was preparing with this awareness for the events in Turkey’s İstanbul, Ankara, and İzmir for its 100th year meeting. Yet, the Governorship of İstanbul, taking no measures against the pandemic in factories and workplaces, ignoring the conditions of shopping malls and hospitals, banned our meeting with the excuse of public health.

This will not prevent the growing attention and increasing participation of workers and students to our party. Our party is marching towards an equalitarian social order with great determination. We will share this determination with our people on September 10, welcoming our 100th anniversary at 500 different points across Turkey and the world.

Yes, we will meet in our neighborhoods, workplaces, public squares for socialism, independence, secularism, republic and salute the Communist Party of Turkey. We invite our people and friends to our meetings.”