TKP: "This unfair and arbitrary electoral system must change!"

The Communist Party of Turkey (TKP) released a statement and started a petition, considering that the current situation must be changed fundamentally for a fair system of elections 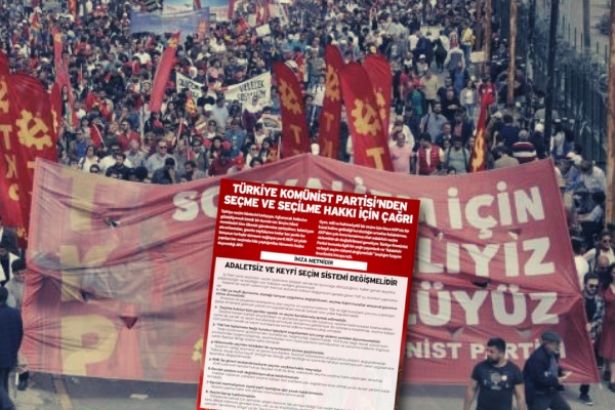 The Communist Party of Turkey (TKP) has prepared a written statement regarding the unjust and unlawful elections process in Turkey. Stating that the March 31st local elections showed that the electoral system turned into a toy in the hands of the power and that the injustice and arbitrariness against the people reached its peak level, TKP started a petition, presenting its proposals regarding the change of this unjust system of elections.

The petition statement is as follows:

Campaign for fair elections: This unjust and arbitrary electoral system must change!

It is parodic that the party which brings the issue of election fraud into the agenda of the whole country and makes this issue so controversial everywhere from television channels to newspaper pages is the ruling AKP itself. There is little doubt about how AKP used its power every now and then during the elections for the past 10 years, however, it has taken over the stage in the election fraud issue, too.

"Because they stole" is the explanation of the AKP for canceling the elections through the Supreme Electoral Council, which alone should be considered an unjust and deceptive move. However, for a fair election, first, it is necessary to get rid of the irregularities that become a pattern with the AKP and then the unjust electoral system, that was established long before the AKP was, needs to be changed.

As the Communist Party of Turkey (TKP), we are mobilizing to defend this and we call on all our people to be part of the campaign we are launching.

The March 31st local elections showed that the electoral system turned into a toy in the hands of the power and that the injustice and arbitrariness against the people reached its peak level.

The TKP considers that the current situation must be changed fundamentally for a fair system of elections and it presents its proposals under the title of "The Unfair and Arbitrary Election System Should Change" through a petition.

1- The convention that allows the electoral council to act arbitrarily should be amended and the rules regarding elections must be put under constitutional guarantee.

All the paths allowing the interpretation and implementation of the right to vote and be elected, which were defined by the Constitution and the law, to be usurped by the council or related committees should be closed.

2- All parties involved in the election should be represented in polling and electoral boards.

The parties involved in the elections were separated by their magnitude and power. After the decision regarding the eligibility of parties for the election was announced, a limitation of representation was brought to all polling and electoral boards. This limitation should be abolished, and all parties involved should have the right to be represented in polling and electoral boards.

3- The judiciary system should be rearranged in order to prevent the unlawful functioning of the Supreme Electoral Council (YSK) under the command of the government.

4-The government should be averted from playing with voter records.

The elections depend on the electorate and universal suffrage. The method of creating voter records should be changed. As in the case of "address-based population registration", the practices that allow those in power to change them arbitrarily should definitely be averted.

5-The rights to vote and to be elected of those purged from government jobs by presidential decrees are legitimate.

The rights to vote and to be elected of those purged cannot be taken away, given the unlawfulness of the decree process itself.

6- If the state aid is not distributed equally, it should be abated.

Equal distribution of the money collected from the people to all parties participating in the election should be the principle; if not, the state aid should be abolished.

7-The prohibition on political party membership of civil servants should be abated.

The right to do politics must be entitled to all public employees.

8- The electoral threshold must be abolished.

The 10% electoral threshold, in which the principle of justice in representation is left aside for the sake of stabilizing the administration, must be abolished. However, in the case of null or reduced electoral thresholds, it is important not to fall into the trap of "narrow zone" preferences that benefit the ruling party and the big parties.