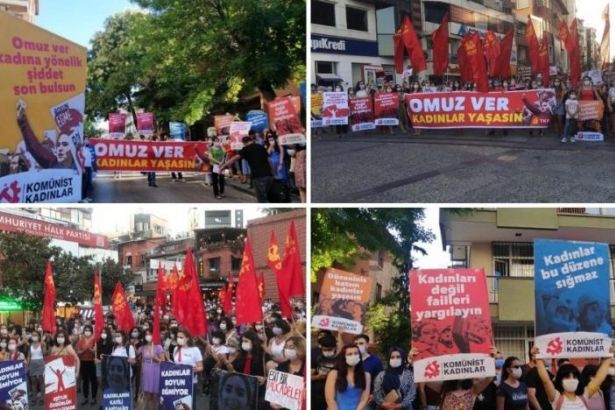 While the number of femicides and violence against women is rising in the country, Turkey's ruling AKP continues to repeat its reactionary statements and misogynist moves.

The attempt of the Turkish government to withdraw from the Istanbul Convention has sparked public reactions across the country. Communist Party of Turkey (TKP) organized protests on Wednesday in three big cities of Turkey, Ankara, Istanbul, and Izmir, against these reactionist moves and violence targeting women.

In the joint press release announced in the protests, the Communist Women noted that this government, which is in need of international conventions to protect women from violence, is unable to enforce even the legal regulations it imposed. "Women of Turkey want not only the implementation of the contract but also the complete disappearance of violence," the press release said.

"We know very well that exploitation is the source of violence against women. We know that women will be exposed to different types of violence as long as this system of exploitation continues. Those who demand withdrawal from the Istanbul Convention are part of the cause of the continuing violence and their move is nothing more than the effort to hide their share in violence and femicides.

Women will be saved from this oppression and violence only by their own organized power. For this reason, working women do not rely on politicians who try to trivialize secularism or on the statements of bosses who have an interest in the persistence of the weak position of women in society. Women only rely on their growing solidarity and organized power," the communists said.

The protests called on the working people of Turkey to organize in the ranks of communists to end the violence against women, to establish a free and equal country for the working women.