With the call of the Communist Party of Turkey (TKP), people in Ankara, İstanbul, and İzmir took to streets on Saturday against the price increases in natural gas and scandals of the gas companies. 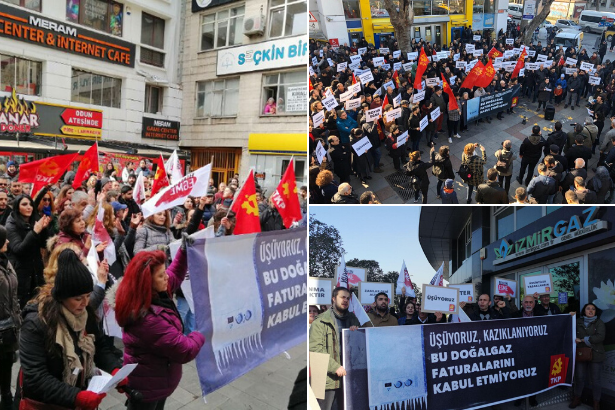 Communist Party of Turkey (TKP) took to the streets against the natural gas price hikes in three major cities of the country on Saturday.

With the call of TKP, hundreds of people gathered in front of the post offices in Ankara and İstanbul as well as the İzmirgaz Headquarters Building in Izmir.

The people, who gathered in front of Istanbul Kadıköy PTT and objected to natural gas bills, shouted slogans such as "Cancel the price increases", "The right to stay warm cannot be sold", and "The system of bosses, the system of robbery". A press release was made after the appeals filed in Istanbul.

People who came together in front of Yenişehir PTT in Ankara Mithapaşa for the same reason both objected to the natural gas price hikes and reacted to Başkentgaz, which transferred funds to the controversial Islamic foundation, Ensar.

Privatized in 2013, Başkentgaz has been recently revealed to make a donation in the amount of $8 million to the Red Crescent in December 2018.

TKP members gathered in front of the İzmirgaz Headquarters Building in Izmir and shouted slogans, saying "We want to warm up humanely", "IzmirGaz should remove its hand out of our pockets".

Izmirgaz Headquarters was closed during the TKP's protest. The authorities, who closed the building in order not to receive the appeal petitions, watched the press statement of the TKP from the building. TKP members will submit their petitions to İzmirgaz on Monday.