TKP restarts its political activities after the historical meeting that remarked the return of the party. TKP published a declaration titled "Enough!" and started its struggle against presidency, anti-labor policies and "false" opposition. 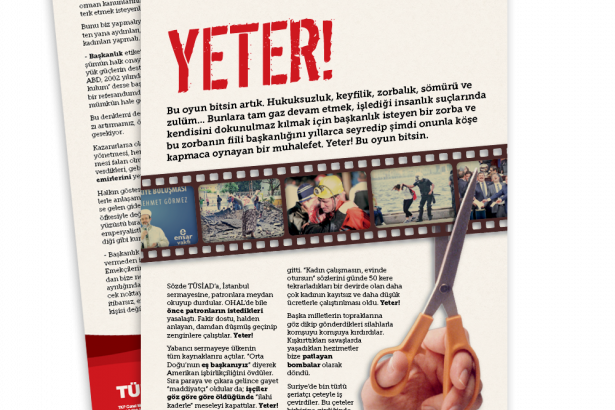 Immediately after its return to political scene, Communist Party of Turkey (TKP) takes its position in the rapid political agenda in Turkey. The comprehensive political declaration of TKP includes its opposition against the presidency system imposed by ruling Justice and Development Party (AKP).

Declaration by TKP titled "Enough!" is distributed all around the country. The policies of AKP are criticized one-by-one, and their fatal effects on Turkish society are reminded. It is underlined that AKP defended only the interests of international and national capital, at the expense of the labor class. The occupational murders increased under the rule of AKP.

In the declaration, TKP reminded that AKP rule created worse conditions for women. Sexual abuse, rape and femicides increased in the period. Also, the role of AKP government in the disaster in Syria is reminded and it is indicated that "the war provoked by AKP government returned to us in forms of bombs."

In relation to the Gülen sect, it is written that AKP cooperated with Gülen sect under the supervision of US imperialism in its first years of its rule and cleaned out all its opponents; then, it cleaned out the Gülen sect, too. AKP still governs the state by supporting other religious sects and tries to cooperate with imperial forces.

In the declaration, it is also underlined that AKP tried to "solve" the Kurdish problem by "taking roles in US plans on the region, together with Kurdish bourgeois nationalists". And now, the atmosphere of terror only provokes hostility.

NO! TO THE REFERENDUM

The political stance of TKP against the presidency referendum expected to be held in April is summarized in the declaration. TKP promotes "No!" votes in the referendum for several reasons. First of all, it is indicated that the presidency system imposed on Turkey will legalize the dictatorship and this will give the most harm to working classes. Secondly, it is reminded that the demand of so-called "stability" carried the country into the middle of a big chaos; both in political and in economic terms.

However, the call of TKP is not limited to the referendum. It is written that "regardless of the result of the referendum, we have to stand against this fundamentalist system of gangs, with an organized and effective power".

The political declaration of TKP criticizes fascist Nationalist Movement Party (MHP) and social democrat Republican People's Party (CHP). It is underlined that MHP always supported AKP government because MHP shared the same principles with AKP: allegiance to capitalists and imperialism. CHP is also criticized because it supported AKP government in very critical moments in recent past: CHP did not react seriously against fundamentalist policies of AKP, it supported Syria policy of AKP by approving mandate for military action and it did not respond to anti-worker policies of AKP.